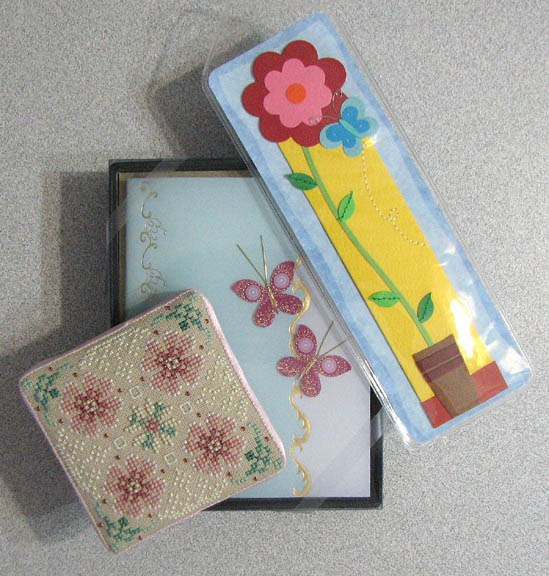 Gaby in Germany received my Just Nan exchange, so here it is! I did Royal Blossoms as a mattress pincushion, my first. I don't think I'd use ribbon again. The sides tended to shred right off if I wasn't careful. I had to substitute some of the beads, so those dark pink beads should have been light pink, but I like it as is. :-)

You can see more pics of the stitched piece on my website. 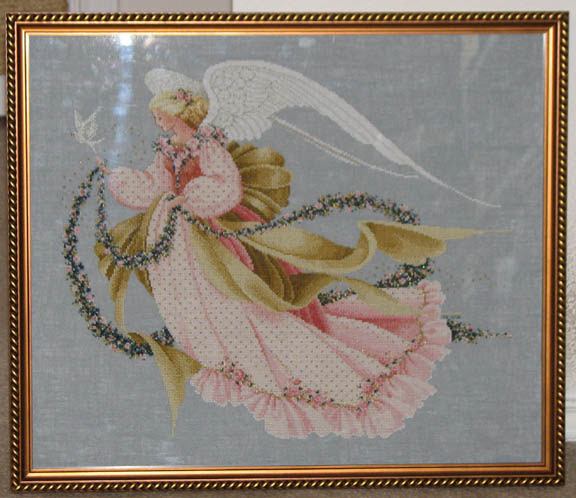 I stitched L&L's Angel of Summer for my mom a while back, and I know I won't stitch it again. Does anyone want the chart? Just leave me your email please. [Taken, thanks!]
Posted by Arthemise at 7:17 AM 6 comments: 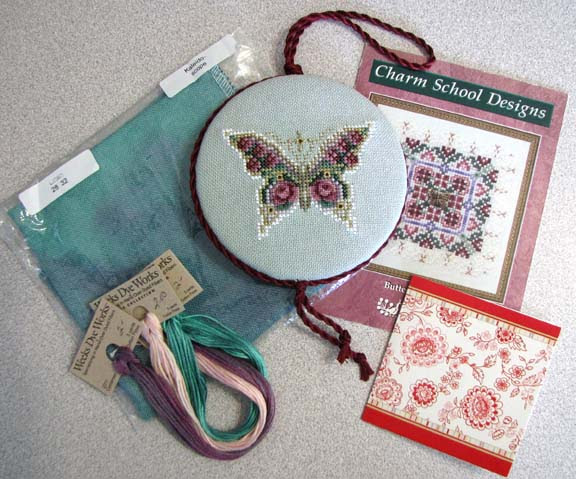 I received this wonderful Just Nan exchange from Erin yesterday. The butterfly is just gorgeous, with the roses stitched over one. I don't think I've seen this piece before. Her blog says it's from the 2000 JCS Christmas issue (I don't have that one since I started stitching in 2001). She did a really lovely job on it.
I haven't received word that my piece has been received yet, but it's only been a week and it had a ways to go.
I should have a pic of TW's Spring Faerie to show soon. It's coming along nicely.
Posted by Arthemise at 8:21 PM 8 comments: 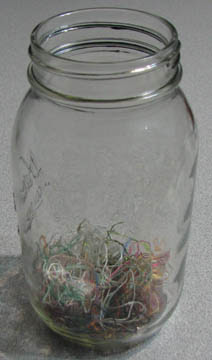 I've been stitching a little but don't have anything to show, other than my ort jar for the Totally Useless SAL. I did wind up starting TW's Spring Faerie, but there's not much to show right now.

Sick again: So now that Logan's better, Matt and I got sick. It's rather mild--sore throat, phlegm, etc. However, I did have fever, which prompted a doctor's visit. Logan gets his tubes in his ears in two weeks.

Diet: I've managed to stick to 2000 calories a day pretty well. The illness has interrupted the exercise, though. As Jo pointed out, your calories depend on your current weight. A normal person's maintenance calories are probably 2000, but since I weigh so much, mine are higher. My doctor has a program that will tell you your maintenance calories; he then cuts them by 500 calories for weight loss.
Reading: To review, I've been rereading Mercedes Lackey's books. She's my favorite author, and I've read her stuff consistently since she started writing. I finished rereading the Valdemar, Elemental Masters, and Fairy Tales series, which I thoroughly enjoyed; I couldn't really remember what was going to happen. I just finished the Free Bards series. The one book that she collaborated with Josepha Sherman on is truly wretched--very sappy and overdone. I'm going to skip the Dragon Jousters and Tales of the Five Hundred Kingdoms books since I read them a few years ago. So next I will probably have to venture into her collaboration novels, some of which I haven't read at all. We'll see how I like them.
Posted by Arthemise at 1:50 PM 1 comment: 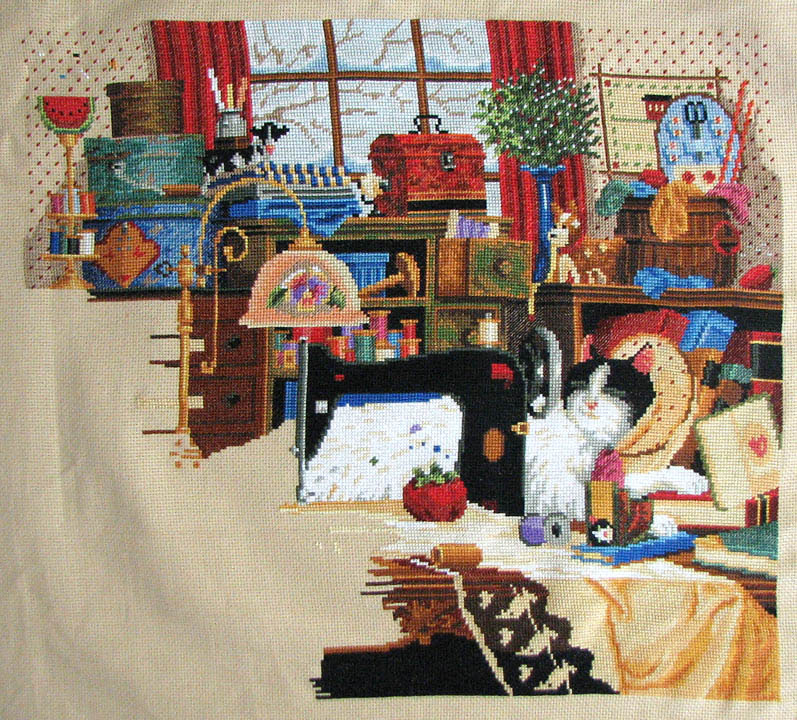 No update in a while because I've been working on my Just Nan exchange piece. I finished it last night, so I may try to mail it today. I had a few frustrations with it, but I think it turned out pretty well. I'd be happy to keep it. ;-)

Maggie worries me that it's a little skewed, probably because of the half stitches. I had to pull them fairly tight because with three strands they don't sit that well. I just hope that the framer can correct it. I'm getting very close to the three-thirds done mark. Another week may do it. I'm going to work on this one until my patience wears out. I saved the backstitching for last because the chart is so complicated that I wanted to be able to concentrate on just that. I usually backstitch TWs as I go because they're always straightforward--no nasty surprises.

Logan and his illnesses: A few days after the Sea World trip, daycare called me yet again. Logan had a low-grade fever, but I took him to the doctor because he just kept crying and seemed to be in pain. Sure enough, it was an ear infection. He gets tubes next month, which is just not soon enough. He's all better for now. Today is his end-of-the-year event at daycare. We'll see if they can pry him off us. Matt has his last exams for the semester today (yes, on a Saturday), so he won't be coming with us. I think he didn't really want to go anyway.

Diet and exercise again: Of course, I regained the weight I lost due to the virus. I'm starting the exercise again. The doctor set 2000 calories per day as my goal.
Posted by Arthemise at 8:20 AM 6 comments: 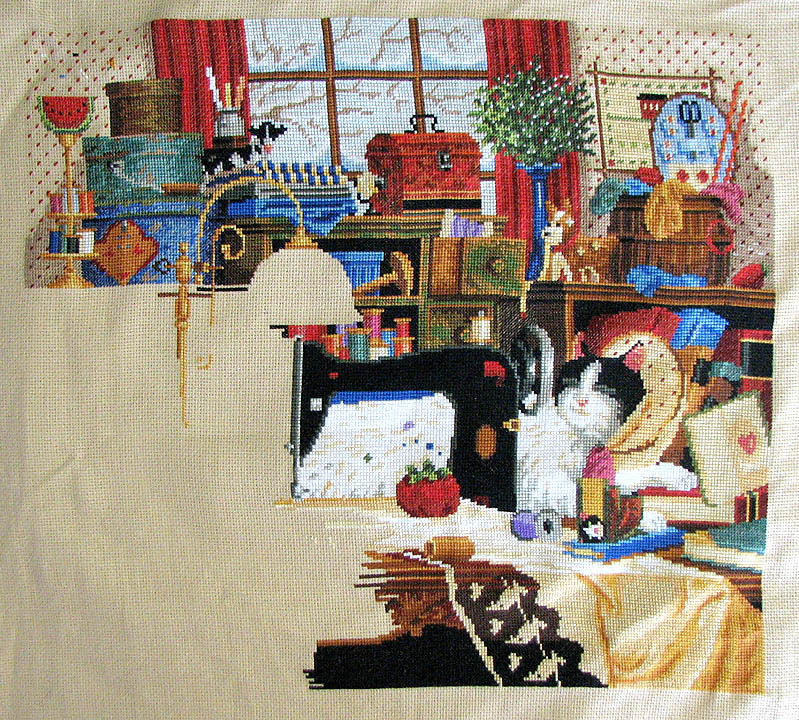 I managed to stitch a little this week, even with the trip to Sea World. I can stitch almost anywhere, but I was so sweaty and exhausted that I didn't stitch very much in the hotel room.
I'm probably going to need to switch to my Just Nan exchange piece this coming week. Once I figure out what I want to stitch....
ENT visit: Matt took Logan to the doctor last week, and the verdict is that Logan needs tubes in his ears. It may be the reason he's not speaking much yet. They're also going to take blood for an allergy test and check his adenoids. The child's been coughing and having a runny nose for a long time, despite medication. While I'm unhappy he has to have surgery, I'm hoping this will make him better. I know he really needs it, but I'm going to be a nervous wreck until my baby's all better.
Mini-vacation: We had fun at Sea World this weekend. We left early Saturday morning and came home Sunday morning. I think Logan was too young to enjoy it really. He wasn't impressed by much. We first saw the orca show, and it was a battle to get him to sit still. His face really lit up when the orcas jumped and then people clapped; he had fun clapping with everyone. We weren't brave enough to try another show, though. We also tried feeding the sea lions, looking at the aquarium, jumping in a sponge pit, and looking at the Clydesdales, which all got a lukewarm response. We tried the kiddie wading pool. That he didn't like at all. I tried to get him to walk around in the water; I guess he didn't like that the water was rather cool and that the place was so big. I managed to get him to go down the slide a few times, but he wasn't happy. I was pretty disappointed because I love the water. He also wasn't feeling great because his allergies were really bothering him. The mucus rattled around at every breath, and it was a never-ending battle to wipe his nose all day. Sometimes he rode in his stroller, but he really liked pushing the heavy thing around where we led him. We also got one of those kid leashes -- convenient but not very comfortable for him. So, maybe next year we'll have better results. There just wasn't enough for him to do at 19 months old. We might have better luck at the children's museum in Austin, so we're going to try that in a few weeks. We also need to get him used to playing in the water outside so he can see how much fun it is. 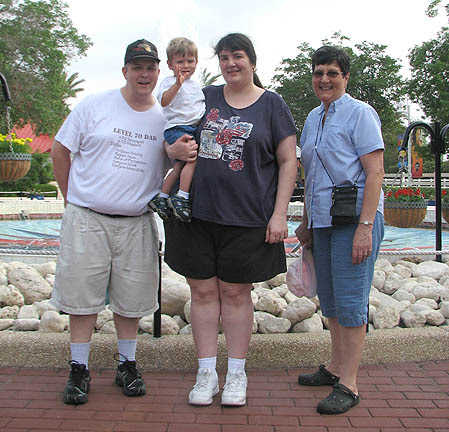