So another order came in (I've been spending money, a little here and there), but the leg of Barnabee's Bride is broken. Apparently this is a fragile piece. I read in someone else's blog (can't remember whose...) that they had received a broken one too. Ugh.

I also received some marking pins made by My Big Toe. I think they'll come in handy when I have to count stitches. I usually have to use needles to mark my place. Looking at them, I think I could make a few myself. I still want to figure out how to make pinheads using polymer clay. That could be neat.

I finished the stitching on my piece for the SBEBB Feathered Friends Exchange. Of course I can't show you a picture just yet. Now I need to find some matching fabric and finish it up.

I received the supplies I was waiting for, and now I can start the Sweetheart Tree Shamrock needleroll. Carol was nice enough to give me the chart. I now have all the ST needleroll patterns I need, and some of the hearts. I'll probably order the fibers, beads, and such that I need as I go. I'm still working on the next block of Chatelaine's Rose and Butterfly Quilt. I should be able to start the inner motif soon, a rose this time. Damier should have another installment soon too.

Home stuff: I'm still trying to get my house all sorted out after Mom's move-in. We have more stuff to put in storage. It's been very nice having someone to take care of Logan first thing in the morning. Mom normally gets up at 4, and Logan seems to be taking after her. Mom never gets tired of him, God bless her! Logan's started eating rice cereal and vegetables pretty reliably. He's hit the six-month mark, and I'm switching his clothes over to the next size. He's still very smiley and has his crying fits when he's tired and can't get himself to sleep (his day includes a 2.5-hour cycle of eat, play, sleep, play). He's not sitting unsupported or rolling over yet, so we're going to have to help him work out those muscles. He goes for more shots and a trip to the ENT next week (we're anticipating ear troubles given his history and his dad's problems when he was a kid).
Posted by Arthemise at 9:26 AM 1 comment: 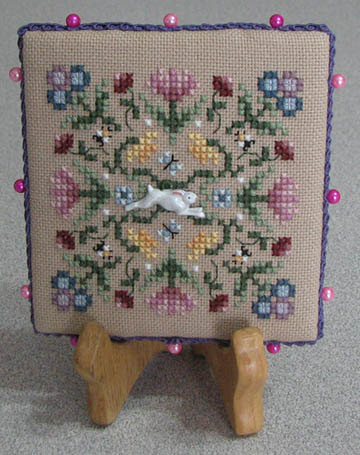 I joined the Monthly Finishing Challenge. I figured a pinkeep was easy enough! This is my second one. Jump for Joy by Just Nan is the only small piece I have unfinished or unframed, so it was a likely candidate (my TWs will get framed). I didn't have any ribbon that really matched the colors, but I got to use some edging that Marie sent me in an exchange. Matt helped me choose the color of pins, and it was his idea to alternate the pinks. I do need to find some better pins for future projects. All I have are these Dritz pearlized pins from Wal-Mart. 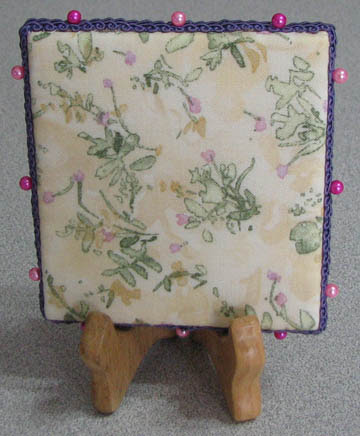 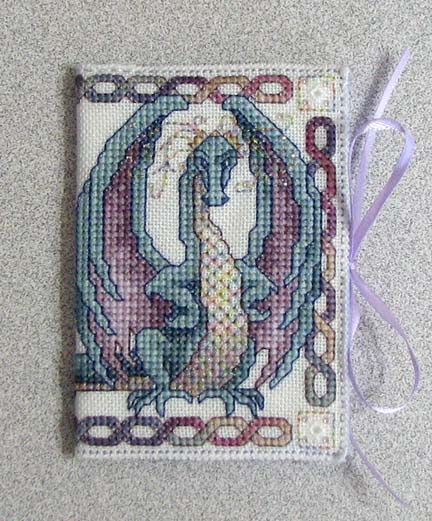 I finished the finishing of the needlebook on my lunch hour. I think I fixed the nun stitches that had pulled away from the piece passably well. Check out the top left of this photo. It's not perfect, which is incredibly annoying, but it's cute. I lined the piece with lavender fabric and put some matboard inside (adjusting the matboard is what caused stress to be applied to the nun stitches and just about rip them out). You can see bigger pics and the inside on my website.
Posted by Arthemise at 3:24 PM 4 comments: 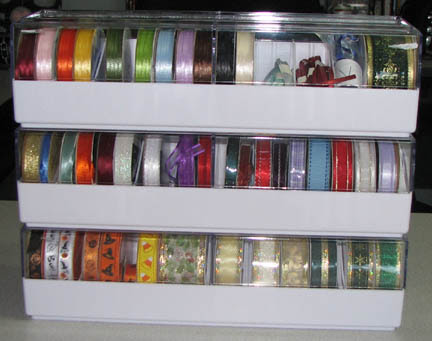 These ribbon spool bins came from Michaels. My mom brought me two in addition to the one I had bought a while back. I can't quite fit all my ribbon, so I need another one, but of course you can't order them online. I'll have to make the trek into Austin at some point. 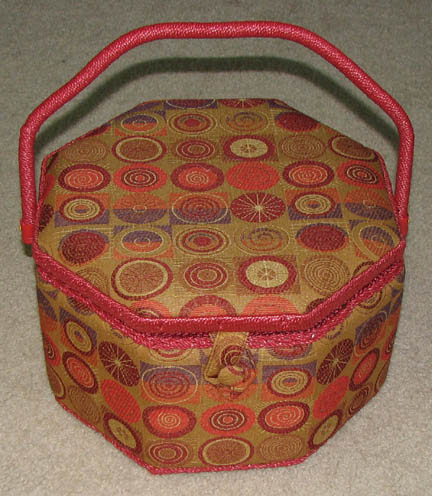 My mom bought me this sewing basket for Christmas. She had forgotten to bring it until this past weekend. The colors and design aren't quite me, but I really like having a box to put my stuff in. And it's not a cheap plastic one like I've been using!
I'm almost done with turning Needle Guardian into a needlebook. I had a mishap, and some of the edging stitches have pulled free. I'm rather annoyed; the nun stitches aren't very sturdy. I think (hope) I can salvage it. I also need to go pick up some white felt. Pictures as soon as it's done!
I also had to redo the backstitch lettering because I did it in the wrong color. I posted a question on the TWBB, and Teresa herself answered that there was a typo on the pattern, left over from when the piece was released at an event.
I'm also plugging away at the border of the next block of Chatelaine's Rose Quilt.
I finally received some packages I had been waiting on, all three on the same day. ABC Stitch Therapy moved their store, so the order took a month to get to me. It includes a piece I want to stitch for SBEBB's Feathered Friends Exchange. I still need the fabric for that, so I can't start yet. I received my Silkweavers fabric for TW's Sun Dragon. That was fairly speedy, about two weeks. I still need some metallics and beads before I can start this one. Lastly, I received a bunch of Sweetheart Tree needleroll patterns from someone on the Wagon BB. If my Pawprints order comes in, that should be all of them!
Mom: She moved in this weekend! We put all our Christmas stuff in storage so she'd have a closet to herself. We still have some stuff to bring over. $60 a month--ouch. But it's so nice having another pair of hands to help take care of Logan. Matt and I got to go out for lunch, and we did the yardwork together, which hasn't happened for over a year. We worked our butts off this weekend, but it's great having the whole family together. Unfortunately, my mom now has an hour commute to work each way. That is really rough, but she hasn't complained about it.
Babysitter: Our babysitter quit because she and her boyfriend are having personal problems. They went to Rhode Island because his grandmother was dying, and now he wants to stay there. She doesn't want to go, so now she has to stay home and take care of her kids. Her sister is babysitting for us now, but it looks like we're going to have to search for another permanent babysitter. Ugh.
Diet: I had lost 11 pounds, but after eating a huge hamburger with bacon this weekend, I gained 5 back. I thought maybe it was the salt, but those pounds haven't gone away. Argh!!!
Posted by Arthemise at 8:18 AM 2 comments: 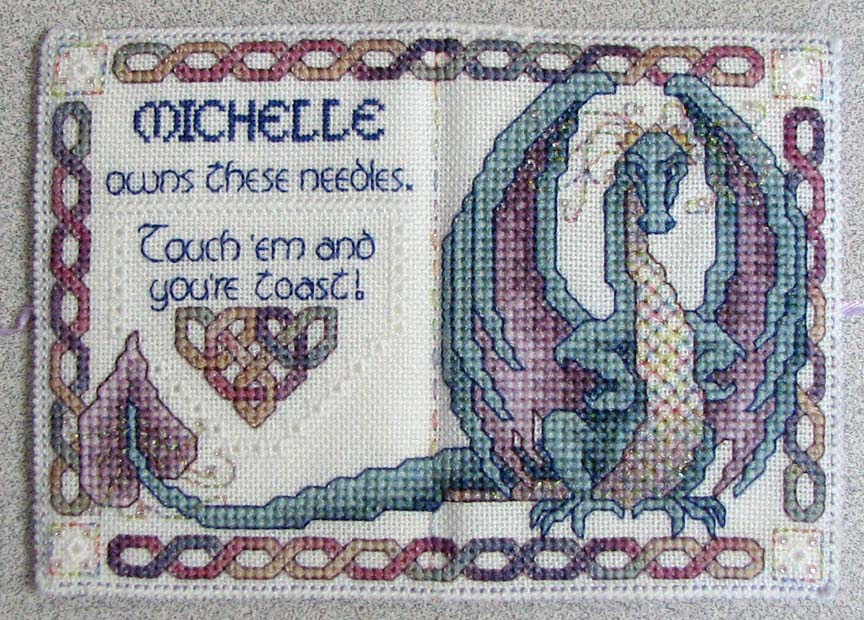 I finished this Teresa Wentzler piece today. Not bad considering I've had to take care of the baby a good bit since my babysitter flaked out on me. I'm going to make it into a needlebook, but I think I want to line it with fabric, rather than letting the back of the stitching show.

I tried TW's recommended way of doing quarter stitches, just making one little stitch, rather than my way of making three-quarter stitches. I'm not sure I like the way the fabric shows through. (Look at the border chain to see what I mean.)

I'm still waiting on my recent purchases. I just hate the waiting.

I was supposed to have Thursday and Friday of this week off, but since the babysitter just didn't show up one day, I'm having to make up my time tomorrow. Bleh.

Baby: I recently discovered the calming effects of singing to Logan, even with my horrible voice. Just words won't do it, but singing will often make him be quiet. Everyone knows about lullabies and babies, but I had no idea the full impact. Logan also likes toys that make noise, such as his favorite, Leap, who sings the alphabet. His face just lights up. That boy's going to be a musician!
Posted by Arthemise at 9:43 PM 9 comments: 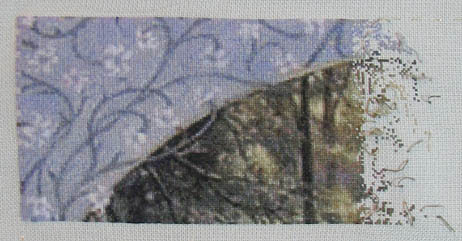 I finally finished page 2! It didn't help that I've been working on small projects here and there.

Today, to reward myself for staying on my diet for an entire week, I ordered some items from Cheryl's Stitchery Nook, a place Carol suggested. I want to start Sweetheart Tree's Shamrock Needleroll and Teresa Wentzler's Sun Dragon and Celestial Fob.

I lost my self-control and started TW's Needle Guardian this past week. I had to restart it because I found some faint tan marks on my white fabric. I think my iron transferred some dye from another piece of fabric. That was annoying, but I'm making good progress. It should be a fairly quick piece.

I'll probably work on Chatelaine's Rose Quilt next too.

Diet: So after a week of staying on my diet, I've lost about 6 pounds. That's mostly water, but it makes me happy. Matt and I really need to do this. We're both looking forward to being able to do normal stuff again!
Posted by Arthemise at 7:13 PM 6 comments:

Here's the next installment of Damier. I charted the Easter basket myself. Maryse had a flying bell and some Easter eggs. It must be a French thing because I had never heard of that, even though I'm Cajun. I also used bright white for the sheep and backstitched it in gray. This line didn't take long because there weren't any solid blocks this time.
I just have two rows left on Eternal Promise, and then I can post a progress pic.
Baby: I had to take Logan to the doctor today because his ear was hurting again. He has fluid in his ear, so the doctor wants him to see an ENT, given his family history. I also have fluid in my ear. Unfortunately, the medicine the doctor gave me is the same stuff Matt's taking that knocks him flat. I'm worse than Matt, so there's no way I can take this stuff and work. Sigh.
Diet: We're starting again today. Really. I need to do this!
Posted by Arthemise at 9:52 AM 6 comments: 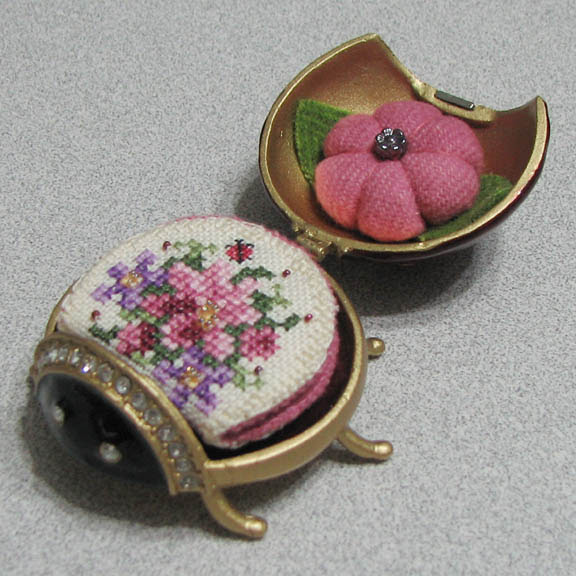 I finished this Just Nan piece last night. It was pretty easy to finish, unlike the last Just Nan box. The only problem was that I didn't understand what they meant when they said the flower should be flat. I do now--it's too puffy and kind of squishes the needlebook when I close the ladybug. Oh well, not too bad. You can see more pics on my website.

This was my first needlebook too. I'm looking forward to doing more!

Baby: Logan's successfully eating rice cereal now. He likes the one with apples. I think he was getting too impatient with the feeding originally, but now he's gotten the hang of it. It's so funny seeing this kid with food all over his face go after the spoon. I hug and kiss him all the time because he's just so darn cute! The babysitter gave him a mohawk yesterday when she bathed him. 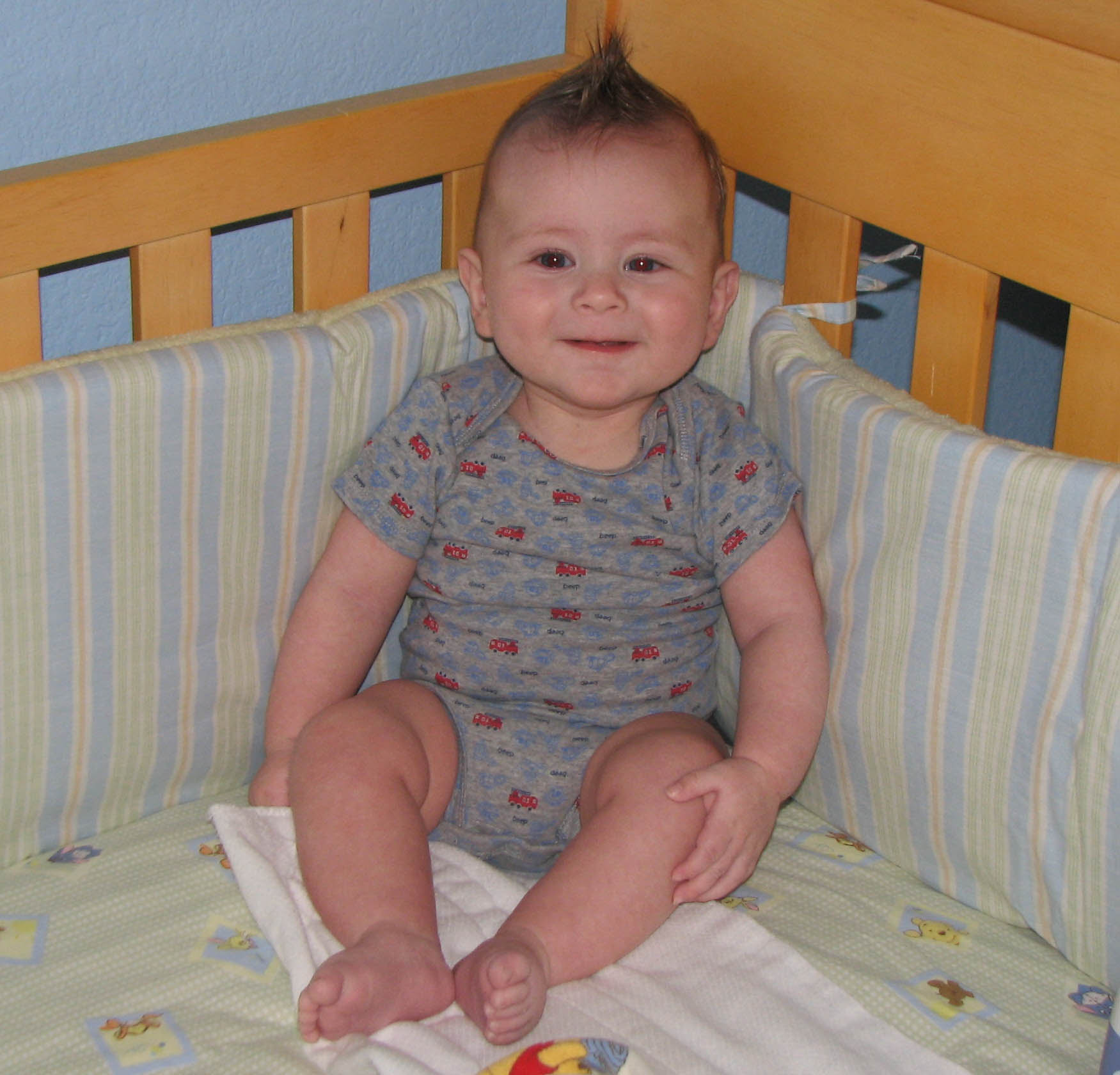