Felicia Day is doing a "Hangout on Air" on Google+ Monday night. The first book is Grave Witch by Kalayna Price. I've read it and the second in the series, plus started on her Haven series. I can't put them down. Granted, it may not be to everyone's taste, but if you're interested in urban fantasy, you might want to check it out. Once Bitten is free on the Kindle if you have Amazon Prime (and here I thought I'd never read a book from the Kindle Lending Library!).
Posted by Arthemise at 7:12 PM No comments: 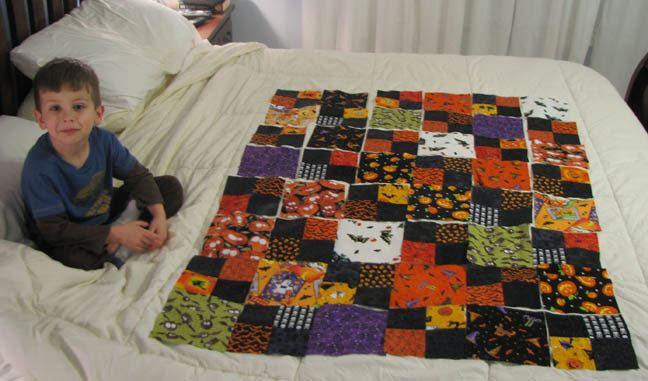 Someone wanted to pose with Mommy's "awesome" quilt pieces.
I finally finished the piecing of the small squares for my Halloween quilt. My mom called me the slowest quilter ever, so I figured I should get on with it. The next step is to sew the blocks into rows (and then sew those rows together).

Even though I measured everything, the squares I sewed together don't align perfectly on the outer edges, though I did get the centers to match pretty well (after redoing a few). I'm concerned that when I sew the rows together, the squares won't match up because of the cumulative effect of being just a little off. Ugh. The first quilt's not supposed to be perfect, right? (I knew there was a reason I wasn't a quilter!)

I've been working on getting my mom organized for a few weeks now, doing a little at a time. That's the only way I can manage it because my mom is my complete opposite when it comes to organization. My first task was organizing her fabric. Should be simple, right? Not so much. She had fabric in boxes, scattered across her bedroom, the garage, and storage. And the boxes weren't just fabric. Often the fabric was buried under other stitching supplies and random items. Foot cream, thread, sewing machine oil, and fabric in one box? Yep.
So once I dug out all the fabric, I had to figure out a way to organize it. Some of my mom's stuff was in plastic bins, but the bins themselves were a mishmash. You really need to have your boxes match somewhat so they stack properly and look good, so I asked her to buy bins. I think she bought three different kinds because she got them at different times. Sigh. I went through her fabric and organized by type and color and tried to use matching bins. As you can see in the first photo, her quilting fabric is organized into red and pink, orange and yellow, green (two boxes), blue, purple, pictures and rainbow, and brown, beige and black. She must like green! 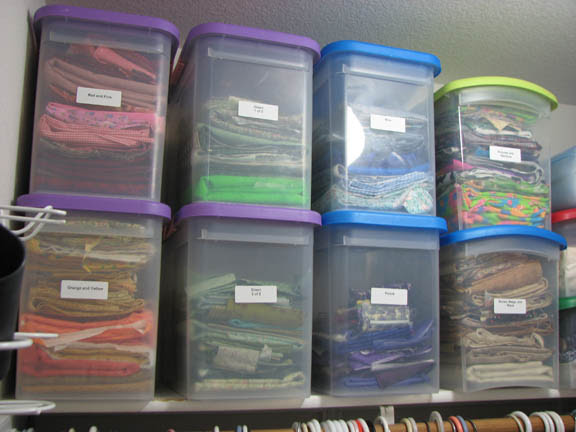 She also had tulle, muslin, and other non-quilting fabric that I stored separately. In the second photo, they're to the left. 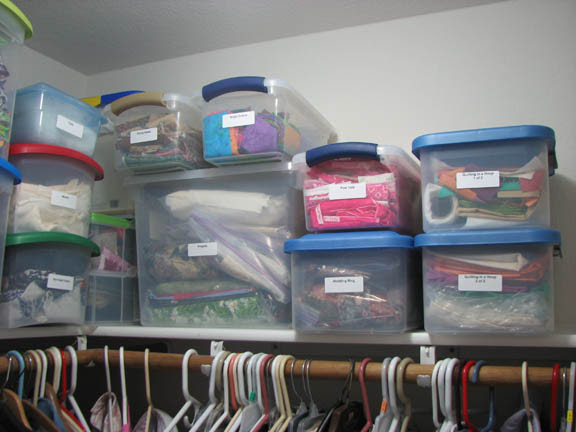 Next came organizing the projects. She has some projects in progress and others just kitted. Of course, most of them were mixed in with the other fabric. With her help, I got them organized and boxed up. The small projects went into Ziplock bags and into that big bin. Larger projects got their own small bin. Oh, and we never did use those new bins she bought. Organized fabric takes up less room that crumpled fabric. I'm sure we'll use the bins for the next step in the process.
Yes, I will be policing any new fabric she buys and will put away scraps for her (she keeps everything). She just made Logan some new pajamas, so...
I'm very proud of my work, and I'm very proud of my mom for letting me touch her precious fabric and organize it for her. My next task is to organize her stitching supplies, which will be an even harder task. I'm sure once we go through her other boxes we'll find more fabric.
My mom retired at the beginning of this month, and Matt and I are enjoying the freedom. She drops off and picks up Logan at daycare, takes him to his appointments, and does more of the housework now. And as a crafter, I can appreciate that she has time to do her sewing, which mostly stopped once she moved in. I can cross stitch with Logan around, but using a sewing machine? Much harder because he wants your attention.
We're still trying to sell the house and have gotten not even one nibble. And I start going in to my Austin office two days a week next month, which means a commute, after nine years of telecommuting. That's going to be rough, but at least my mom's in town in case Logan gets sick.
Posted by Arthemise at 8:53 AM 4 comments: