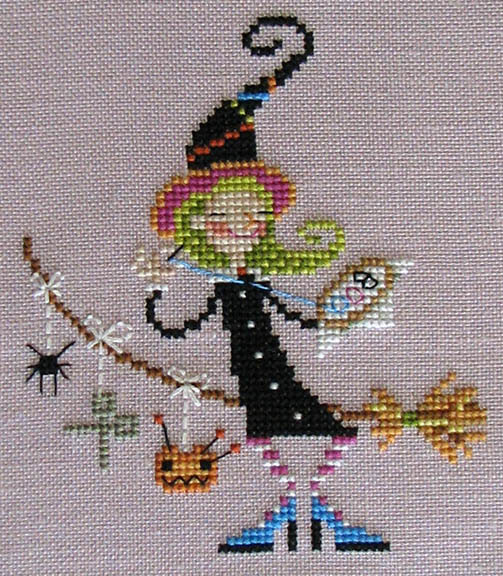 While looking through the Just Cross Stitch ornament preview issue (July/August), I fell in love with Brooke Nolan's spirit angels! I'm not usually one for angels, but I love these. I ordered a few from her website. I joined her Yahoo bulletin board, where she has some free charts. Stitchie Witchie is one of them. I just couldn't wait to stitch her! I'll turn this into a padded matboard ornament, I think.

That's all I can call it. I was working on my Halloween exchange piece, Halloween Spot Motif Shoe, from the Just Cross Stitch Halloween issue, which I finally received after Nordic Needle was out and Ginger's delayed shipping on me twice. I stitched it on some large-count fabric I had on hand, over one. Bad idea. I put interfacing on it, sewed it together, and tried to flip it inside out. It was too bulky, and all my attempts just shredded the fabric. So the entire stitched piece wound up in the garbage, and I threw away that fabric just so I wouldn't be tempted to use it again. Argh! So now I have to figure out something else to stitch, but I think I'm going to take a break. I'm too annoyed to enjoy it.

Family outing: Yesterday Matt, Logan, and I went to the Austin Children's Museum. It was...mediocre. The baby section was too boring for Logan, and the other areas were mostly too big for him (as in he couldn't understand them or wasn't tall enough to see them). He eventually started to enjoy what he could do, but it took a while. At least I don't have to keep wondering if he's missing out. Also, he's been babbling up a storm lately, giving a good try at saying most words. There are many sounds he can't say yet, but he's giving it a go at least.
Posted by Arthemise at 12:14 PM 2 comments: 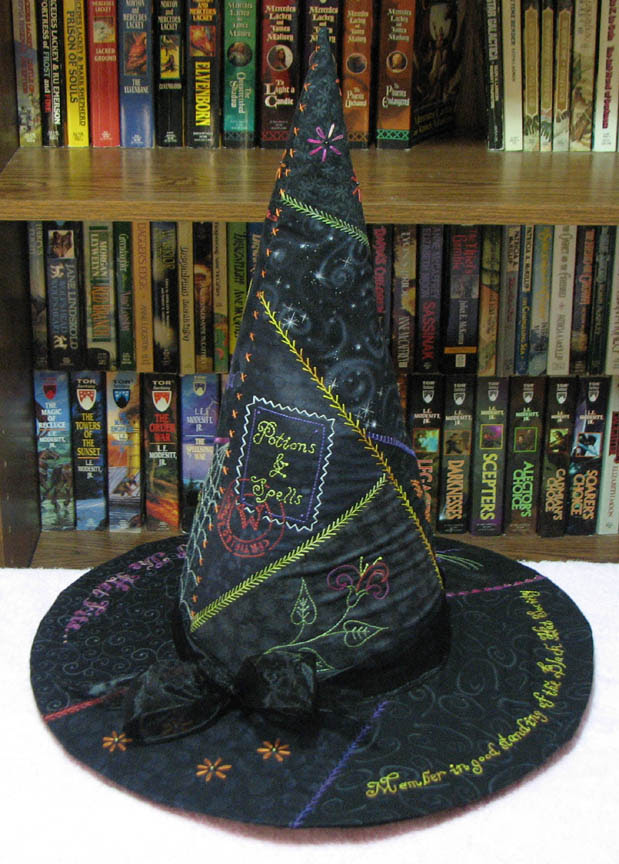 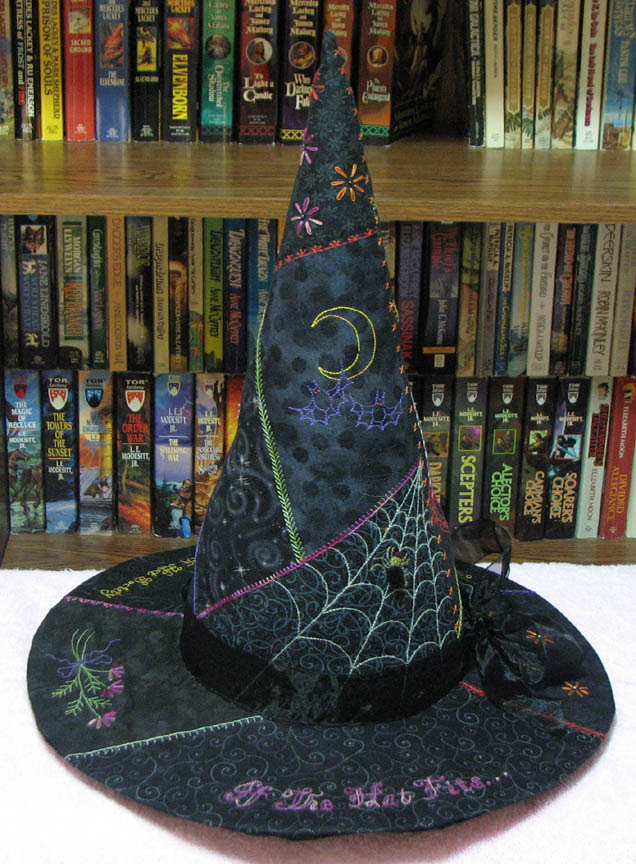 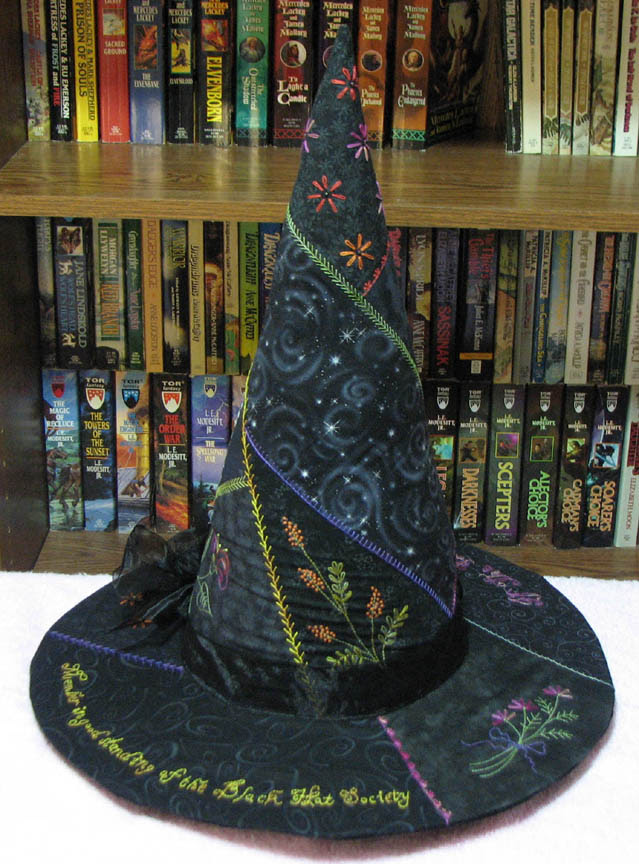 Here's Zelda's Fancy Hat finished! (Click for bigger pics.) I'm donating this to a silent auction at work. I was going to show pics at every step, but with everything going on, I didn't get to it. No worries, I'm going to do a second hat, so I hope to take pics then. I learned a few things along the way, so maybe this will make my own hat better!
Whole bunch of sick: As you can tell, I haven't blogged in weeks! But then I've been sick with a sinus infection for about three weeks now (Levaquin to the rescue!). Matt wound up in the hospital with rhabdomyalosis, which means all his muscles were breaking down. They gave him IV fluids and bicarb, and his levels eventually came down. There are two theories: drug interaction since he was taking meds for severe back pain or a virus (the catch-all). He's all better now. Oh, and Logan got a stomach bug (fever, diarrhea, etc.). My mom caught something the other day, fortunately after we were all on our feet. Everyone's on the mend now. Matt just needs to catch up on a week's worth of schoolwork, poor guy!
Posted by Arthemise at 12:13 PM 5 comments: 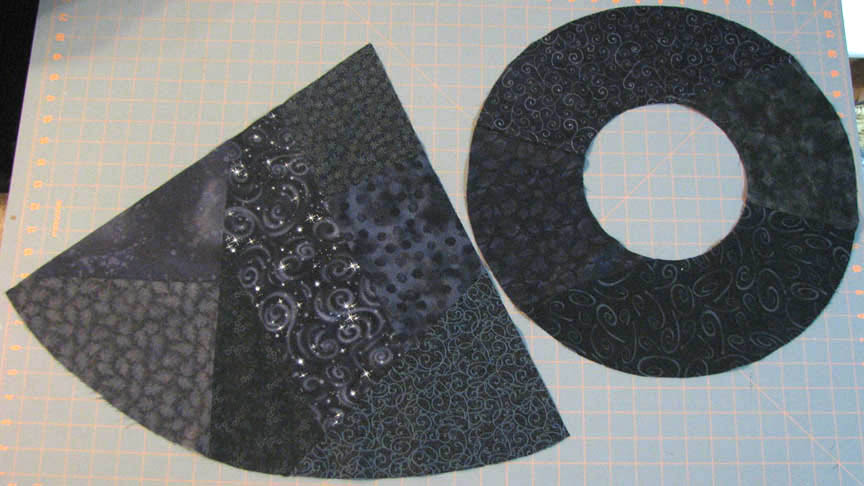 Sewing the pieces together was really easy. The owner of the local quilt store gave me the idea of putting a piece of thick tape on the 1/4-inch mark on my sewing machine to help guide the fabric, and that worked really well. Much better than buying an expensive foot for my sewing machine! Next is basting these onto large pieces of muslin. Then the stitching can begin! I'm looking forward to that part.
Posted by Arthemise at 7:31 AM 1 comment:

By the Sea exchange from Lisa V. 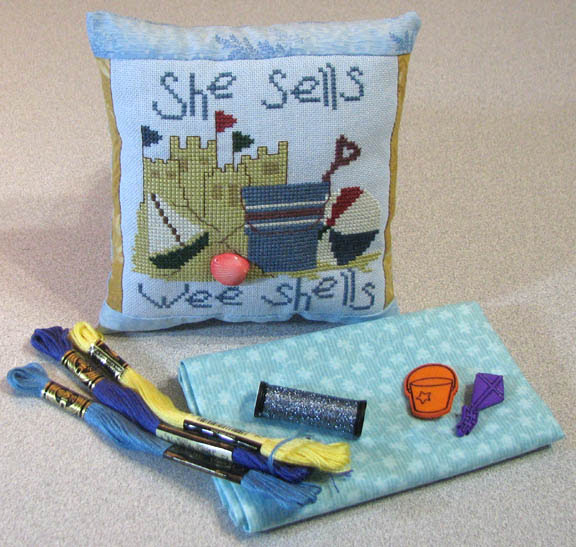 Here is a photo of the exchange Lisa V. sent me for HoE's By the Sea exchange. The cute little pillow is Wee Seashore by Heart in Hand. She stitched it on 28-count ice blue evenweave and added the small shell button. Logan helped me open the package, and it took forever to get those buttons away from him. He really liked them! I'll have to make something for him using them. I really appreciate what she sent and will use the extras with a good heart! Thank you, Lisa!
Posted by Arthemise at 8:56 PM 6 comments: 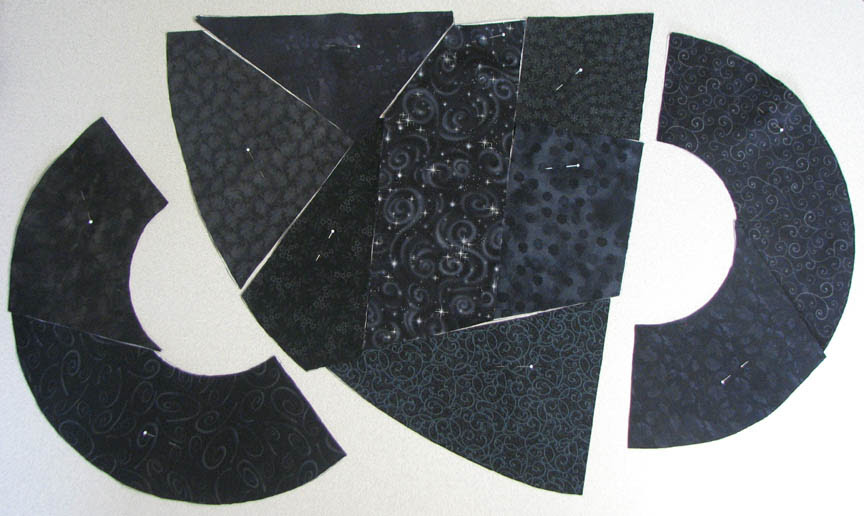 I managed to cut out my pieces last night for Zelda's Fancy Hat. I'm going to chronicle my progress in case you're interested. I cut out two of each in hopes of doing the second one for a charity auction. I'm excited! Now if I could just find a 1/4-inch foot for my sewing machine.... The next step is sewing it together, and I'm not sure I can freehand it.
Posted by Arthemise at 12:05 PM 3 comments: