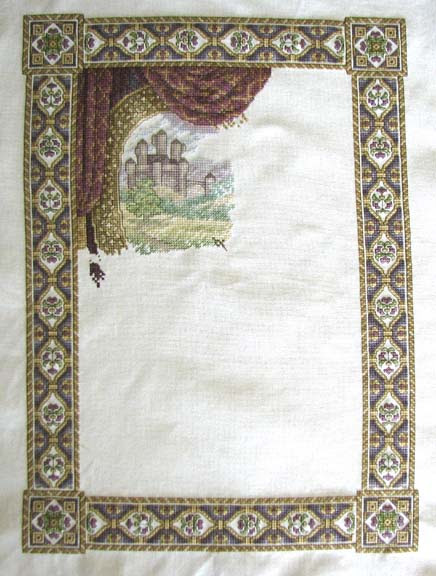 Here's my progress on TW's Lady of Shalott. Those curtains took a while to do! I've been involved with an online game, Runes of Magic, so I haven't been spending as much time stitching. I've also been enjoying my Kindle. As a wonder, it's allowing me to let go of some of my paperbacks, which have been doing nothing but taking up space for many years. You can't keep everything.
I'm regretting my choice of fabric for this one. I think I should have gone for the tea-dyed fabric the chart called for. I thought it would be mostly covered by stitching, but it shows in the mirror. Too late now!
Diet: I've been doing well with my diet since Lap-Band surgery. I hear horror stories of people throwing up all the time with the band, but fortunately I have not thrown up once since I got home. I've lost 43 pounds so far. I'm averaging a pound a week -- slow but steady. I did get a second tightening of the band. My hunger is under control, but I can still eat bad things if I want to. Sometimes when I get tired or overwhelmed, I resort to the bad food again, but at least I can't pig out like I used to.