Missed the gathering in Dallas

First Logan got sick, then my mom, and then me. So that made me miss the gathering of stitchers in Dallas-Fort Worth yesterday. I had been looking forward to this for weeks! This always seems to happen when I have plans. I'm pretty unhappy about it. I really wanted to meet my fellow stitchers from the boards.

So instead I stayed home in bed and read a book (a good book, granted). I also managed to trace and cut out my pattern on freezer paper for Zelda's Fancy Hat. I am toying with the idea of making two hats, one for me and one for the silent auction for charity at work. We'll see how it goes. I need to get cracking if I'm going to do it.

I have a free chart up for offer. It is She Sells Seashells by Country Cottage Kids, which I stitched for an exchange. The pattern is not perfectly crisp anymore (it's plain paper), and I've misplaced the plastic bag for it, but it doesn't have any marks. If you'd like it, please leave a comment with your email address (or email me your address if you don't want to post it). I'll draw a name if there's more than one person interested.

Coming soon: a progress pic of Lady of Shalott. 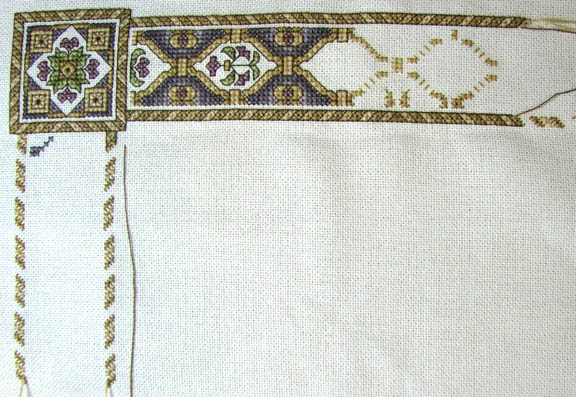 I began this in June but have only now started working on it in earnest. It is very rich looking, and I'm really enjoying it so far. I do need to work on Maggie the Messmaker some more since one of my goals for the year was to finish it, but I'm indulging myself a little right now.

Incidentally, I had a reader ask about the Barnabee's Quest SAL a while back and never got to answer (please leave an email address if you have a specific question for me). The SAL was one that a few of us did together and wasn't on a website or anything. I think everyone has finished their pieces now.

Also, Babs asked where I found the Sweetheart Tree needleroll patterns. I found them in a variety of places, and some are sold out. Stitches and Stuff has some on their website. Sorry I can't be more help.
Posted by Arthemise at 7:36 AM 3 comments:

By the Sea exchange 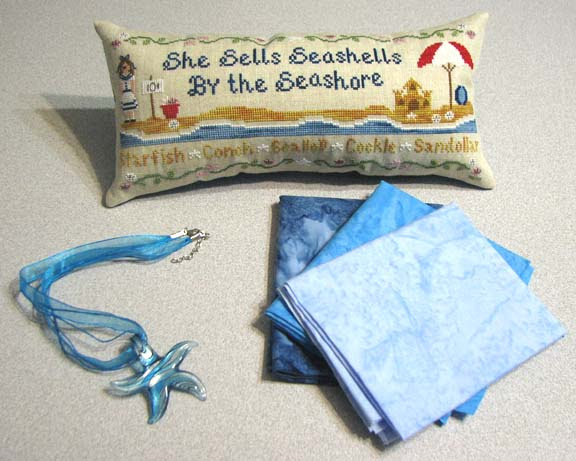 Nic received the Hooked on Exchanging (HoE) exchange I sent, so I can show a photo now. This is She Sells Seashells by Country Cottage Needleworks. The back of the little pillow has a pretty blue-green fabric similar to the ones I sent her. It's so nice having a quilt shop in town now!
This was a fun stitch. I replaced the Crescent Colors with Weeks Dye Works. CCs bleed so easily that I'm afraid of using them anymore. I think I used an entire skein of amber for the sand! I changed up a few colors because I'm not fond of persimmon.
Posted by Arthemise at 7:25 AM 12 comments: 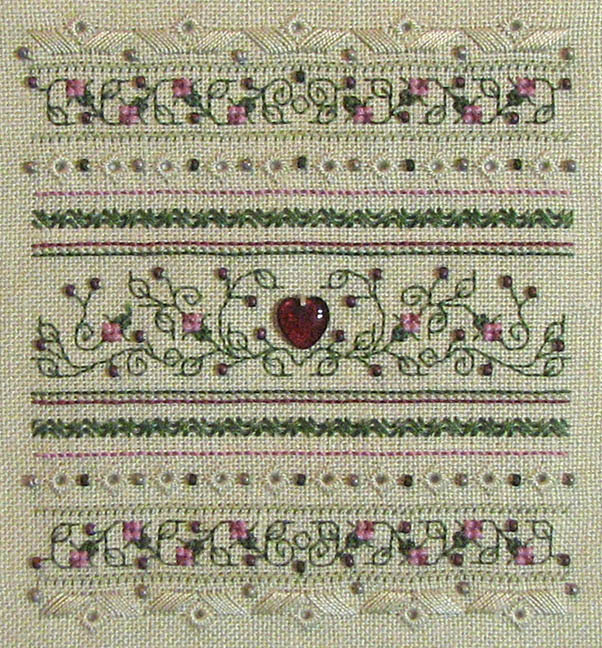 I finished this one last Sweetheart Tree needleroll today! That's the last of the series, and I'm so relieved. While I enjoyed stitching them, they're so similar that it got monotonous at times--and I have a high tolerance for monotonous stitching!

Most of these are done on Wichelt fabric, but the color for this one (champagne) was discontinued. I chose Zwiegart putty instead. Let me just say how much I prefer Zwiegart over Wichelt. Wichelt linen is coarse and see-through. Zwiegart linen is soft and denser. It also seems to have fewer slubs. I haven't really paid much attention to the maker of linens, but the difference is so pronounced, I can't ignore it. I think I'm going to stick to Zwiegart linens from now on, no matter what the design calls for.

Warhammer: Matt and I have been enjoying playing Warhammer Online. We're not letting it get to addiction level, though. That way lies madness. Once Matt starts the fall semester (in a week and a half), we're going to have less time to spend on it anyway.

My little biter: Logan got sent home from daycare the other day because he had bitten other kids three times. We emphasize to him how wrong that is, but it doesn't seem to get through. Ah, the terrible twos.

Facebook: Matt's gone and gotten me addicted to Facebook. It's so weird seeing my classmates from high school--only older and with kids that look just like them.
Posted by Arthemise at 10:13 AM 8 comments: 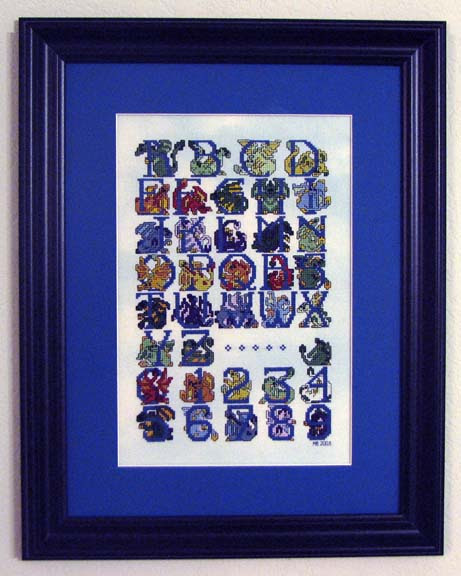 Here is a picture of Dragon Alphabet all framed, as promised. This one reminds me of the days when Matt and I were dating. I'd stitch on this piece while I listened to Matt and his friends game.
Yesterday I put the last stitches on the finishing of my By the Sea exchange piece for Hooked on Exchanging. I'll try to mail it off tomorrow. I think it came out rather nice, and I wouldn't mind keeping it, even though it's not my style. I try to stitch the piece I think my partner would like, not the piece I would like. There's no guarantee I'll get it right, but I try.
Cupcake: Here's yet another cupcake. These were a request from Matt, who loves peanut butter. They were good, especially the icing, but fortunately peanut butter is not my thing. They were safe! 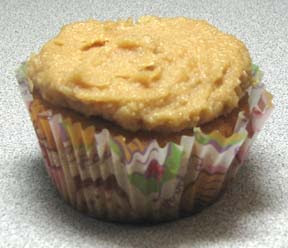 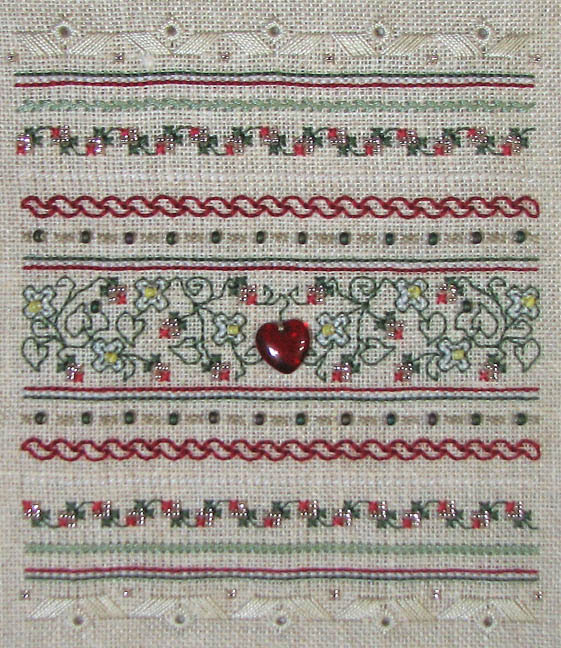 Have you ever liked your mistake better than the way a pattern was charted? That's what happened to me here. I mistook a square symbol for a circle symbol and put beads where there should have been dark red stitches. I thought it looked different for a Sweetheart Tree pattern to have all those beads, but I double checked even! In my defense, the ST charts are tiny, faint, and hand drawn. I did really like the effect; even my mom commented on how pretty it is. Then I saw the symbol correctly on the smaller flower lines and realized what I had done. Normally I would have ripped it out to stay true to the designer's vision. But I really liked it! So I gritted my teeth and left it as is. Click on the photo to get a better look. It's very sparkly.

This is my second to last Sweetheart Tree needleroll, and I have the fabric for the last one. I ordered it along with a chart for the By the Sea exchange, which I'm furiously stitching on. It's a little large for an exchange piece, but it was all I could figure out to stitch.

I also ordered the Weeks Dye Works for Zelda's Hat. My mom bought me a ton of different black fabrics, so I'll need to start that soon.
Posted by Arthemise at 6:51 AM 8 comments: