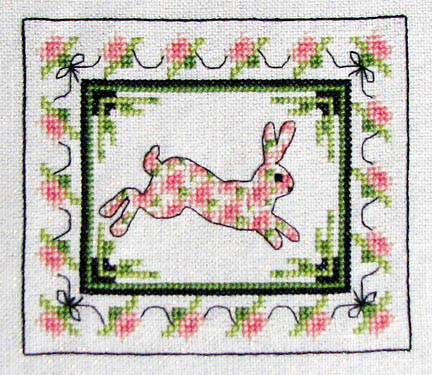 This is the Easter 2011 Freebie from Chatelaine. You can find the pattern on Martina's blog. I stitched in on 32-count opalescent. I rarely use glittery fabric, but it works for this piece. I'm going to make it into a little cushion, and I'll show some pics when it's finished. I got frustrated when my other little pieces were all missing floss, so I started something new, which I'm trying to avoid (I have a lot of WIPs right now). I'm still working on Rose Quilt (also a Chatelaine) when I have time to myself.
Since my floss order still hasn't shipped after three weeks, I canceled the order and will get it from someone else. After I canceled the order, the place said they were waiting for the floss to come in. Why couldn't they tell me that right after they received the order or when I emailed them a week ago? Some things I can wait on, but some things I really don't want to. Give me the option. I guess they were afraid to lose the order, but now they've lost a customer.
I'll order from a place in Austin, the Needle Works. I haven't been there, but they ship stuff really fast. They have a lot of canvas and needlepoint on their website. I really love some of the pieces. I don't need a new hobby, and the stuff is very expensive, but I'm really drawn to it. Sigh. 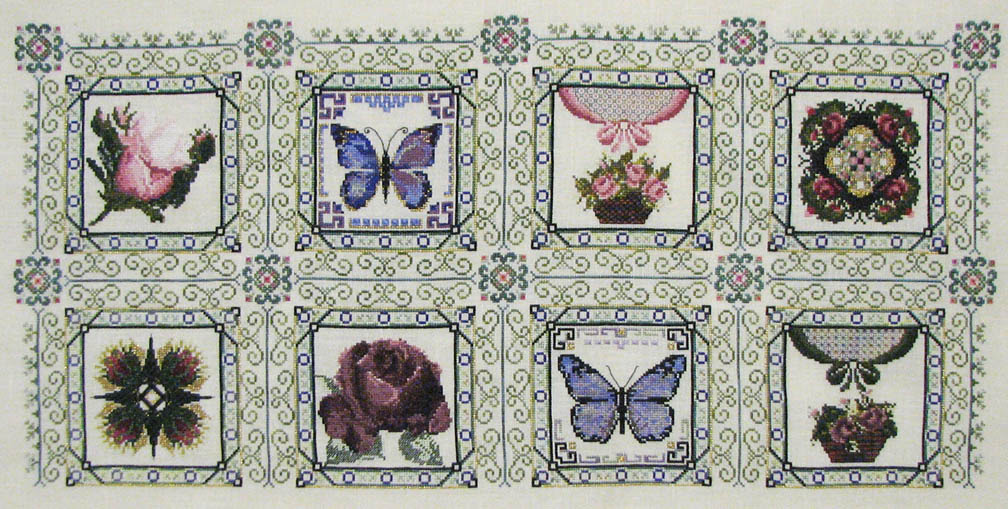 It's hard to believe I haven't worked on this one since 2008. I think the huge size of the piece is what makes it so tiresome to work on. I found some plastic hair clips that might help. Make sure you click on this one to get a bigger image.
So of the three pieces I'm actively working on -- this one, VS's Gingerbread House, and a Halloween piece -- I'm missing one color of floss for each. I can still do some other stitching on the pieces while I wait, at least.
I bought fabric today for a table cloth for my little white table. I'll work on it after my mom gets back from her vacation next week. I'm getting rid of the plant stand, and I'm planning the table cloth and some fabric wall hangings using some frames I already had. I'll post a pic when it's all done.
Thanks for the compliments on the table. It's the one we had in the kitchen of our old house growing up. The thing is a good bit older than me. If it's as old as the other antiques, it would be around 80 years old. (It's got an extra leaf we keep in the garage.) My mom repainted it a while back. It could use a good scrub. I'm leaning toward staying with two chairs so that the tablecloth shows up better and doesn't make the space feel too cramped.
Posted by Arthemise at 12:13 PM 8 comments:

So this spring break marks one year since I had Lap-Band surgery. Sigh. This is going to be a very depressing post. Feel free to skip it. Really, I'm warning you now.
So...I lost about 40 pounds very quickly after I had surgery. I've gained a little back but have kept most of it off. Even that isn't much to celebrate because that's what I gained after I decided to get the Lap-Band. Basically I stopped fighting myself from eating because I thought the Lap-Band would be the answer. It isn't.
It's great that I'm not gaining weight, but I didn't spend all that money (20 percent of the bill is still a lot) and go through all that pain just to not gain weight. It's still a diet, which I've failed at my whole life. The Lap-Band does curb some of the hunger but not enough. I can still eat an entire meal from a restaurant. I think the gastric sleeve would have been better for me (where they basically remove most of your stomach), but the insurance wouldn't pay for it. Had I known how badly this would fail, I might have seriously considered paying $10,000 (and then given up the idea because we don't have any money).
I can still get the band tightened some more. I may try that again. It's the carb craving that's getting me. I really wish I hadn't gone off the diet for our trip during the summer. That has resurrected my addiction to carbs, and I can't seem to kick the habit on my own.
I can also try exercise. It's pretty hard on my body, but I can do some walking. With Matt's job situation, it's just hard to work up the enthusiasm to get going. He keeps getting rejected, and as we know, depression certainly doesn't help the diet situation. Food is our comfort and what we keep falling back on.
At this point I'm just tired. Tired of fighting the hunger. Tired of thinking someday maybe this will be the thing that does it for me. I'm going to be fat for the rest of my life, but I don't want to be. No matter what successes and loves I have in my life, my weight will always be the failure that counts the most and that defines me.
See, told you, depressing.
Posted by Arthemise at 9:57 PM 9 comments: 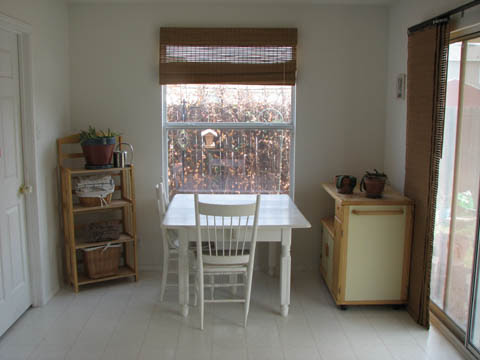 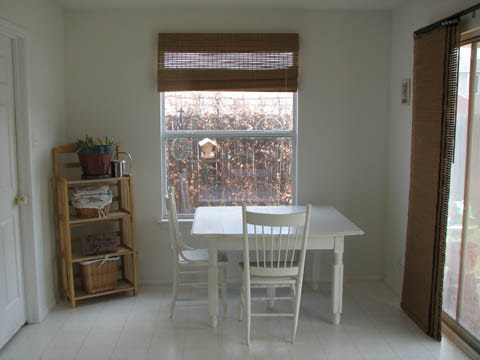 We're in the process of decluttering, packing some items, and staging the house so that we can sell the house in May. Here's a design question I have for you guys. Should I get rid of the plant stand (used to be a wine cart) or not? It's pretty rickety, and I wouldn't feel too bad about getting rid of it. What else does this part of the kitchen need? A table cloth? Pictures on the wall (and where exactly)? I can add a third chair if I get rid of the plant stand.
Posted by Arthemise at 12:27 PM 10 comments: 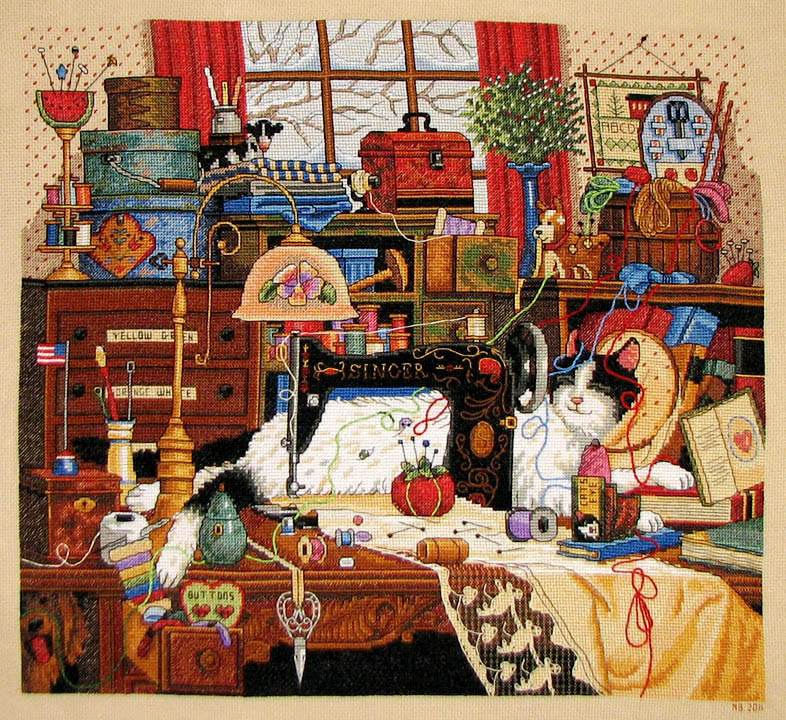 This piece has been the biggest nightmare piece I have ever faced. No Teresa Wentzler piece, no hardanger, no HAED has given me as many problems as this piece. It's a beautiful piece, don't get me wrong. But I had nothing but problems from the minute I started. With a TW, I can just go without reading the directions. I sort of tried it with this piece and didn't notice the different strands and half/full stitches. So I had to rip a lot when I didn't pay close enough attention to the chart. So, for the final time, let me enumerate the things I didn't like about the design of this piece:
I think the key here is that you have to pay attention to every little thing you do with this chart. I stitch to relax, so that's sometimes difficult. But it's done, and I'm not going to buy another Dimensions kit. They probably aren't all this bad, but I'm not taking that chance. Of course, I still have Magnificent Wizard in my WIP pile. I think I'll save that one for later, even though I had wanted to finish it for Matt's graduation in May. I just don't think I can take it right now. So, on to my Victoria Sampler gingerbread house. I can enjoy my stitching again!
Posted by Arthemise at 8:25 AM 13 comments: