Legends of the Spellcasters HD 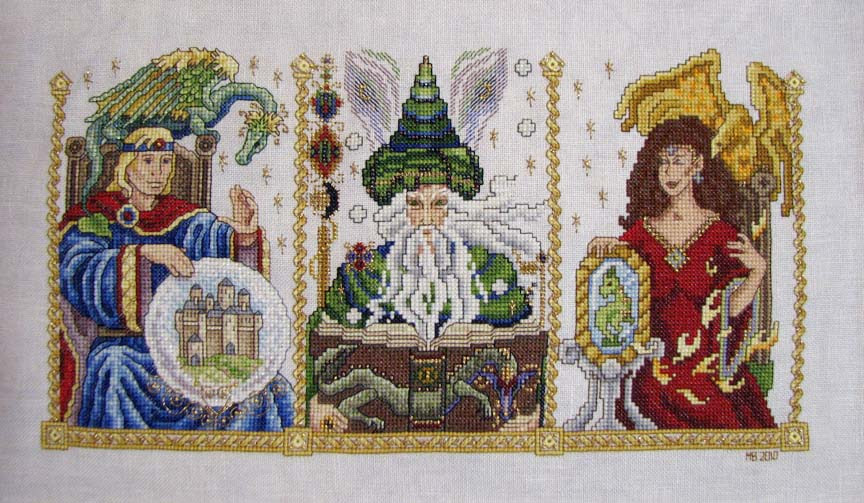 I finally finished this collaboration piece. Teresa Wentzler did the first panel, Black Swan did the second, and Dragon Dreams did the third. It seemed to take especially long, probably because it was so detailed.

Another reason it took a while is that I've been reading a lot. Matt bought me a Kindle for Mother's Day, and I'm really enjoying it.

I'm going to dig out another WIP to work on next, Lady of Shalott or Maggie the Messmaker probably.

Weight loss: I'm 38 pounds down now. My Lap-Band has been tightened once, and it's helping with the hunger. I still need more restriction, but we're doing it slowly. It's so weird to eat a small meal and not still be hungry! I like it. I almost feel normal.

Legends of the Spellcasters update 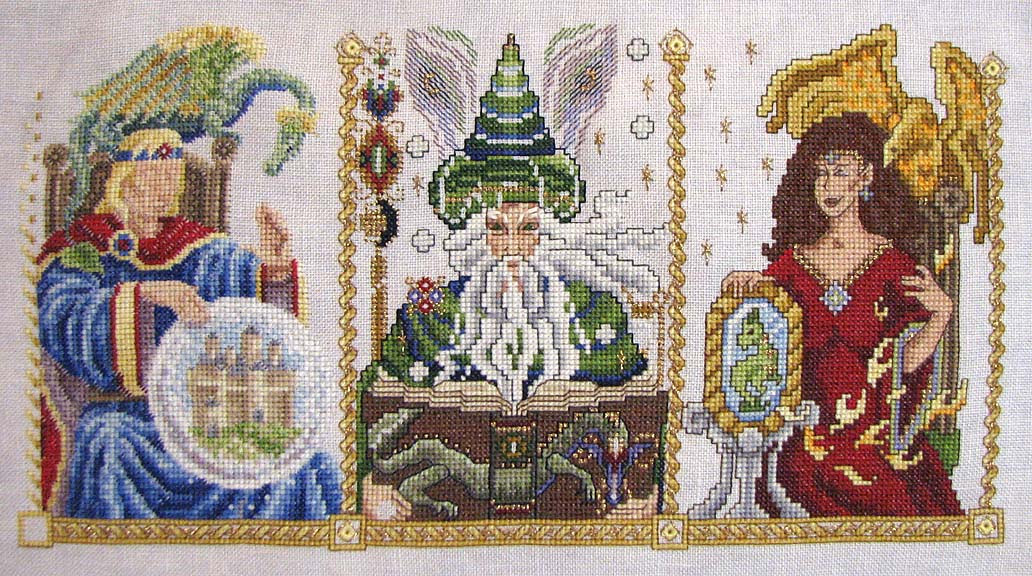 I know, long time no post. I've been in something of a stitching slump. I've been reading some good books by Diana Gabaldon, Robin McKinley, and Jacqueline Carey, and I've been playing a new computer game, Runes of Magic, both of which have conspired to take up all my time.
As you can see, I've made fair progress on Legends of the Spellcasters, though not at my normal speed. Something about the piece has been unappealing to me as far as stitching, and I can't quite put my finger on what it is. I like the way the piece looks, but maybe it's that it's by three different designers. Dunno.

Health: My recovery since the Lap-Band surgery has been going well. I had my first fill (when they tighten the band) a few weeks ago, and I'm feeling a little restriction but not nearly enough to curb my hunger. So far I've lost 37 pounds, and I can tell a different in my clothes. My weight loss is slow but consistent at 1-2 pounds a week. I think it will speed up once I get enough fill in the band (I'm at 3.5 cc; most people get to their "sweet spot" at around 7-9 cc). I get my next fill at the beginning of June. The doctor likes to do it slowly so that my body adjusts. He said 2-4 weeks between fills, but it's been more like 4 because of his schedule.
At the moment, I have an ear infection with a perforated eardrum, the first I've had in a very long time. Now I remember how painful they are and know what Matt and Logan go through quite regularly. Ouch. Apparently sinus surgery isn't going to make me completely illness free, but at least I'm not getting sick every month. (Just every other month.)
Posted by Arthemise at 8:13 PM 8 comments: