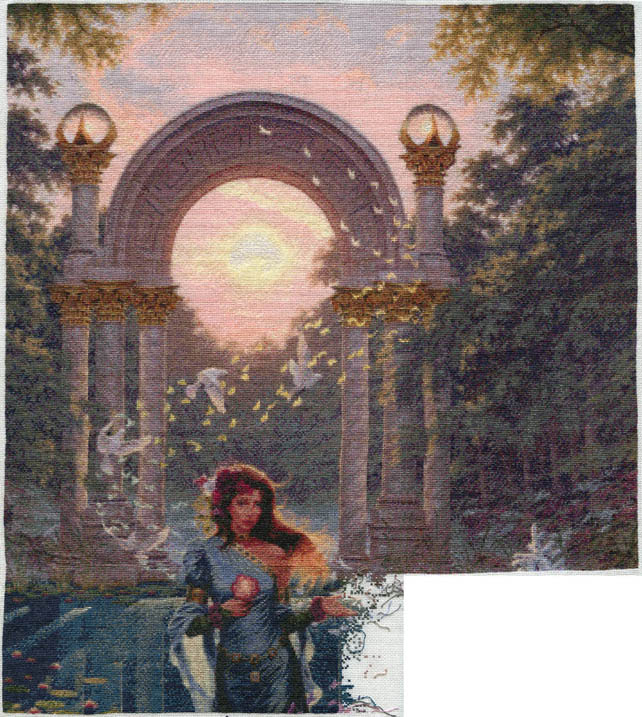 At long last! Here's the next installment of The Awakening.
I haven't decided what I want to work on next. I guess I'll have to go fondle my stash for a bit.
Posted by Arthemise at 6:04 PM 11 comments: 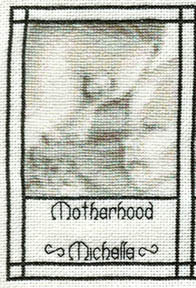 I finished my square for Tash's round robin. It's a section of HAED's Motherhood by Selena Fenech. I figured this one was a good one for me since I'm preggers. :-)

I'll move onto The Awakening next. It shouldn't take long to finish the page since it's mostly done. It's the lady's body, so I've been looking forward to finishing this section for a while. She looks good, if I do say so myself.

While I'm not turbo stitching like I used to, I am getting some stitching done. I'm having some sciatica, so I can't stitch for hours on end. Drat.
Posted by Arthemise at 10:22 PM 5 comments: Here is what I stitched for Allie's RR. She's making various smalls, and this one is a pincushion. I stitched the Just Nan piece Rosebuds, rearranging its various parts. Click the pic for a better photo.
This RR is coming to a close. I think I only have one more piece to stitch on, and then we send them all home. It's been fun, but I am definitely looking forward to seeing my 12 Days of Christmas mostly done.
Posted by Arthemise at 9:30 AM 7 comments:

Last weekend was Camp Stitchalot, a weekend-long retreat at Camp Lone Star in LaGrange, Texas. It's put on by Ginger's. I brought The Awakening, and I got tons of compliments. There was a group of international students also at the camp, and the ladies I was sitting with made sure they came over to look at my piece. I was very flattered. I'm almost finished the current page. I thought I'd finish it there, but I guess the color changes just slowed me down.

I also bought stuff while I was there, lots of Just Nans and some lovely Ginghers scissors. I also have some Dovos on order after borrowing someone's. Heaven!

A doll class was also being conducted in another part of the camp, and we peeked in on Saturday night. Oh my. They were making a wood fairy, and I was amazed at the artistry--and the sewing skills. It even inspired me to buy a (hopefully) easy doll pattern from Joggles.com--fairy on a stick.

One of the ladies I was sitting with is also from Bastrop and my subdivision. After we talked, we realized that her husband had taken Matt's job after he left. They were also the couple who took care of our dogs on our honeymoon 3.5 years ago. Matt had asked someone at work to take care of them, and then he had asked this lady's husband to do it since we were in the same area. Go figure! Kathy said she had seen my stitching on the walls when she came visit. We also realized we have the same floor plan for our houses, which, OK, it's that uncommon in this subdivision. I thought it was all pretty freaky, as did Kathy, but Matt wasn't as impressed. We're going to get together again and show off our stash.

The pregnancy is coming along. I had a tiny bit of spotting, and my abdominal muscles are really sore. The doctor said the ligaments and muscles and such down there are probably moving around. I haven't heard too many people complain about this, but after breaking my toe on Thanksgiving, I guess my muscle are really out of shape. I'm now 11 weeks.

I'm stitching on my Just Nan round robin. I figured that at my current pace, I'd better get started!
Posted by Arthemise at 12:47 PM 3 comments: