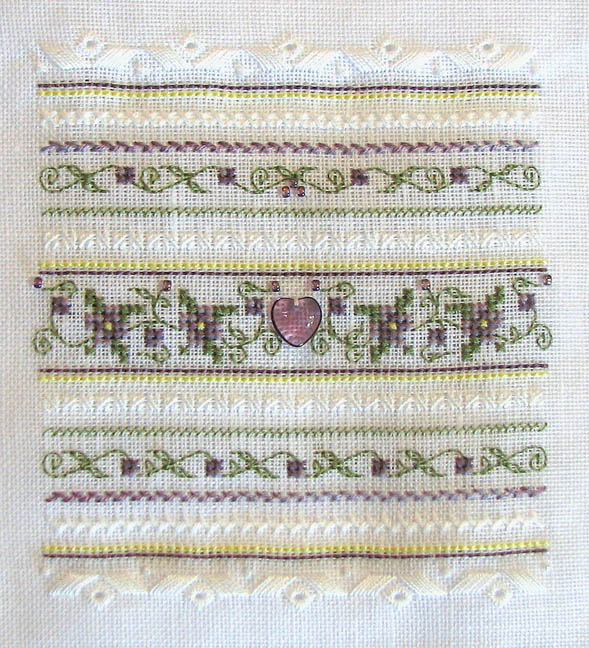 I finished this Sweetheart Tree needleroll today. The most tedious part was the last two rows with the eyelets. Bleh. I've still got five needlerolls left to do.
I was going to put the first stitches into TW's Lady of Shalott since I have the fabric for it (and have had it for a few years). But apparently I cut the fabric down too small! I don't know how I managed that because I always measure and remeasure. I guess I screwed up somewhere and my brain just kept screwing up the same thing when I remeasured. So...if I want to work on this piece, I will need to buy some more fabric. I may just do that since it aggravates me so much.
Update on the family: Logan's still coughing and snotting but feeling good. Matt went back to class today, but he's still not completely better. We had to take the dog to the emergency vet Saturday because she tore open some stitches. The vet put in some staples, but the dog has somehow gotten the staples out and hidden them. As Matt said, either Logan will find them, or I'll step on them with my notoriously bare feet. We've finally let Lufy come up the stairs to be with us because she was getting so distraught. She's not eating much, and we've had to cook some chicken to get her to eat, spoiled dog. My mom's finally home, which will ease the burden some. My back gave out on me yesterday, probably from carrying the boy so much. I could barely walk. After some muscle relaxers yesterday, I'm still groggy today. Whew! Is it Friday yet? 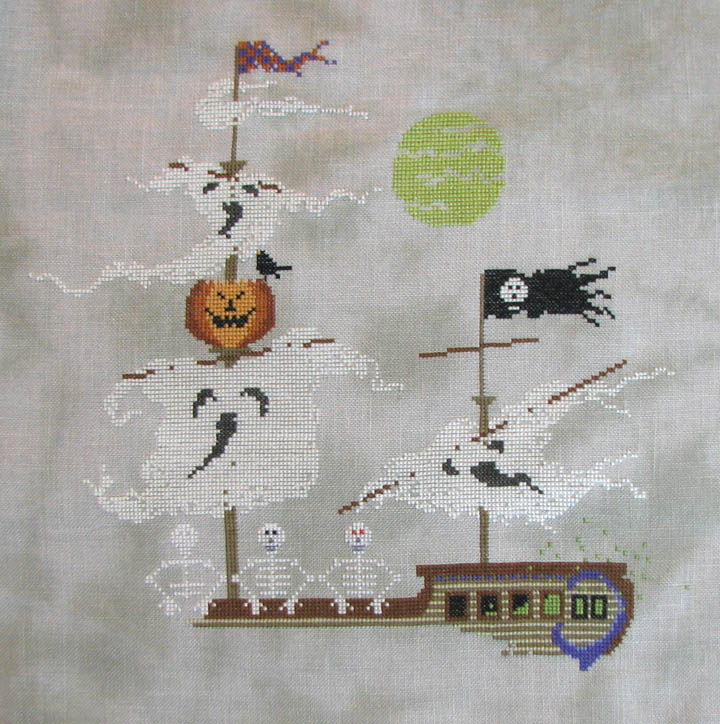 I've finished the second mast now. I think I'm going to switch to Maggie the Messmaker for a while. That piece is my goal for the year, so I need to get going! I'm putting off starting a new TW as long as I can because of these WIPs. It's so tempting!

Update on the kid and husband: Logan is in good spirits and just has some sniffles and coughing left over from his illness. Matt is still feeling bad and isn't going to class. I'm exhausted from taking care of everything. Whew!
Posted by Arthemise at 12:16 PM 9 comments:

I received my Kreiniks in yesterday and just finished the piece up while Logan was taking a nap. The sun rays were a pain--too tight and the fabric distorts, too loose and the braid goes floppy.
Matt was feverish yesterday, and today Logan's snotting and coughing all over the place. It will be a miracle if I don't catch this stuff.
Posted by Arthemise at 12:32 PM 8 comments: 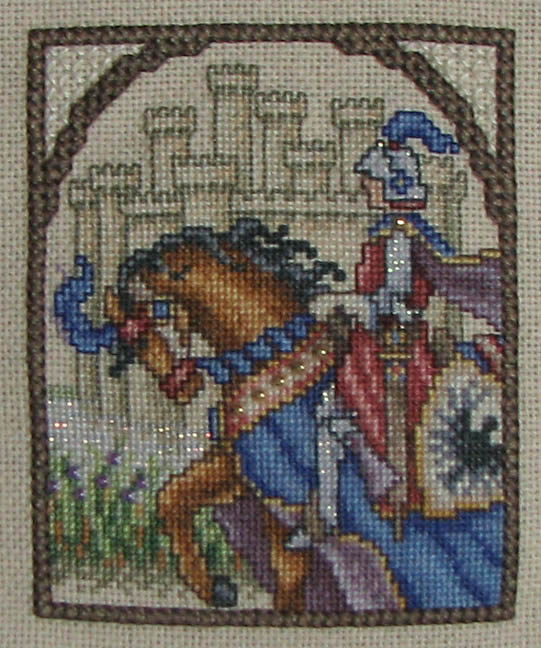 The beads came in today, so here's the finished product. I think I'm going to pull out another Sweetheart Tree needleroll as my mobile project.

Logan is getting better, and is very bored in the house. I try to take him for walks and such, but my back can only take so much. The dog had surgery to remove some large growths yesterday, so we're fighting to keep Logan away from her. She really wants to be with us, but having the child around her huge incisions just isn't a good idea. And of course, ouch, $800. Yes, we really, really love our animals.
Posted by Arthemise at 5:36 PM 6 comments:

Yet again I'm left waiting on missing supplies. I thought I had enough of the Kreiniks, but apparently that wasn't the case. I'm missing some sparklies in his tail and the rays of the sun. It always happens that right after I order something, I miss something else. This is another one by Teresa Wentzler, by the way. Does that fabric look familiar? It's Iris Garden by Silkweaver, which I bought a while back.

I'm having a little trouble getting another Silkweaver fabric, Days Gone By for My Stitching Treasures Accessories. I did the box by Jeannette Douglas a while back. Apparently now that Zweigart has taken over Silkweaver's fabrics, the colors are completely different, even though they have the same name. I need some fabric to match the box, so I'm going to have to figure out a substitute fabric. Argh.

Logan's been very sick. Yesterday he had a fever most of the day and cried hoarsely almost constantly. Today he's a lot better but still not great. He refuses to eat anything except a few sweets and isn't drinking nearly enough. The doctor says he has an ear infection, yet again. We're going to see another ENT soon. Matt thinks Logan needs tubes in his ears, but I'm dreading my little boy having surgery.

So, so much for spring break. I won't be getting to do any of the things I had planned, but oh well, Logan comes first. Doesn't mean I have to like giving up my free time, of course.
Posted by Arthemise at 4:20 PM 5 comments: 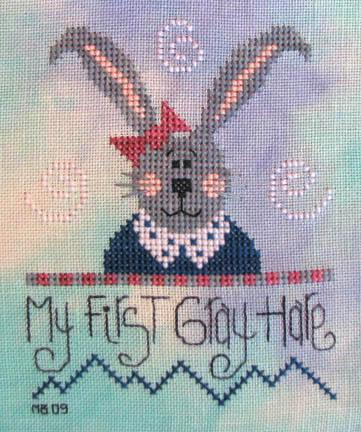 Now that's a heading to make you stop and pause!
I managed to frog the hot pink and replace it with light pink, and I personally like it better this way. I'm not sure the hand-dyed linen is perfect for this piece, but it was leftover and I like the effect. I rarely used hand-dyeds just because I never know how it's going to turn out, even with a preview picture.
This chart (by 4 My Boys) was in a pile BeckySC sent me a while back when she was cleaning out her stash. Thanks, Becky! I thought this one was cute because Matt's forever plucking my gray hairs. I had only a few when we met, but after the kid, I just seemed to get them a lot, more than he can keep up with. My mom's family grays late, so at almost 40 I'm thinking a handful isn't too bad. Poor Matt was all gray in his 20s. We'll see what Logan gets. Maybe our genes will balance each other out, though Matt's seem dominant at the moment.
Matt also finds it funny that I'll have one long hair that's brown, then gray, then brown, etc. I guess it's my stress levels.
If anyone wants this chart, please leave a comment saying so and your email address.
Sick again: We got a call from daycare yesterday that Logan had a fever. He's coughing again too. Matt's taking him to the doctor this morning. Poor boy. It seems that daycare or the weather is keeping him constantly sick.
Posted by Arthemise at 7:24 AM 10 comments: 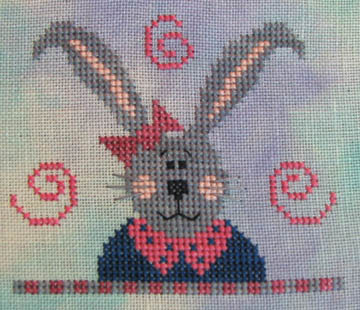 I'm a little miffed. This pattern, My First Gray Hare, gives a DMC equivalent for Sampler Threads Cotton Candy. After I had stitched the hot pink, I thought it looked a little strange with the Red Grape (red). I checked the picture, and the hot pink is actually supposed to be very light pink. I also checked the Gentle Art website, and indeed Cotton Candy is a very light pink. Apparently the DMC equivalent is wrong--way wrong. Now I have to rip out all the hot pink and replace it. I think I'll go with Porcelain (because it's what I have). Argh!

See, it's the small pieces that give me fits, not the large ones.
Posted by Arthemise at 11:22 AM 4 comments: 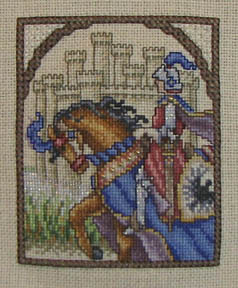 I finished Medieval Miniature today, but I'm missing the iris beads for the flowers. I'll order them Monday. I didn't think I'd finish it this soon. I spent most of the week working on Skeleton Crew because I was a little tired of working over one. I don't normally mind, but there were a lot of color changes, which is a pain.
And just let me say that if I ever thought frogging over-two stitches was hard, frogging over-one stitches is 10 times as bad. And even worse than that is frogging the backstitching. The floss just shreds. Fortunately I only had a few occurrences of that. The piece is about 2.5" x 3", in case you're wondering. It's not called "miniature" for nothing!
Next week is spring break. Matt has the whole week off from school, but I only get the Thursday and Friday off work. It's better than nothing. I'm looking forward to having two days to do whatever I want to do--probably stitching. And then the following week my mom is going to be out of town, and with Matt busy with school, that means I'll have the bulk of taking care of Logan. He's such a cutie, but I get so tired running after him.
Diet: I've decided that I'm going to try the shots--Byetta. From what I've read online, it can help curb your appetite since your blood sugar is no longer out of whack. If I can control my appetite, I can do the rest. I've done it before. Shots give me the shivers, but it's either that or surgery at this point.
Posted by Arthemise at 4:02 PM 6 comments: 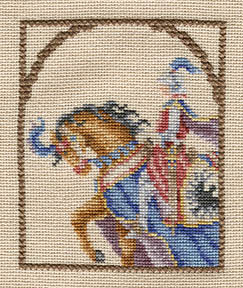 I'm making good progress on Medieval Miniature. As you can see, I've got the knight and horse done. The castle is in half stitches, and I'll be working on that next. I have to order one of the beads.

I've gotten so many lovely comments on my faeries. Thank you! I get a lot of comments on how fast I stitch. I really don't have much stitching time available now that I have a toddler, at least not in comparison to how it used to be. I think the two-handed method helps (one hand above the stitching and one hand below); I use it when I can use my stand. I also stitch while I watch TV. It's really hard for me to watch TV without stitching nowadays.

I've been having the urge to start another TW. I plan to stitch all the faeries eventually, but I think I want to do something else next. I'm still thinking. Skeleton Crew is still on the schedule, though. Candidates are Lady of Shalott, The Enchanter, Dragon Ride, and Fantasy Triptych. What do you think?

This weekend Mom and I ran around town. We actually have a quilt shop in Bastrop now! They didn't have a great selection, but they do offer classes. There wasn't one I could take right now, but I put my name on the list for later. I'd like to take a few classes to teach me the right way to sew. I've only stitched a few things so far, so I know a few basics. I know there's a lot of basic info I don't know yet.

Diet: I've managed to stay on my diet all week, which is a major accomplishment for me. I'm basically trying to do the diabetic exchange. I've tried something new--writing down what I'm going to eat the following day. That's worked pretty well so far. The only hickup was when I planned to eat out and we wound up getting fast food. I went a little over but not nearly like what I normally would have.
Posted by Arthemise at 12:30 PM 10 comments: