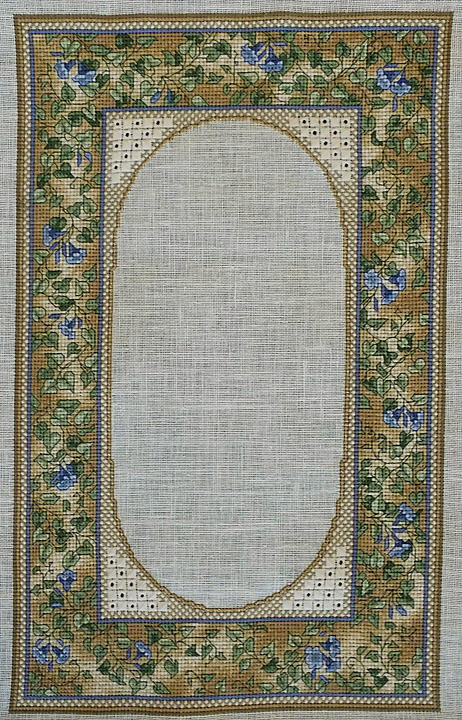 As expected, the backstitching made a world of difference. Now I get to the more interesting stitching of the inner motif. I first need to do some organizing and pre-blend my lengths of floss. I do like organizing, so this is fun too.

Despite Logan's behavioral problems at school, I have noticed a marked improvement in his reading. It's amazing how they go from the alphabet to reading pretty darn well from kindergarten to first grade. I bought some of the level 2 Star Wars Rebels books, and he went right through them. Time to order more books. I like that the publishers label the reading level because it's hard sometimes to find something appropriate for him to read. He's in first grade, but level 2 seems to be just right for him. He doesn't get every word but enough to give him confidence in his reading. 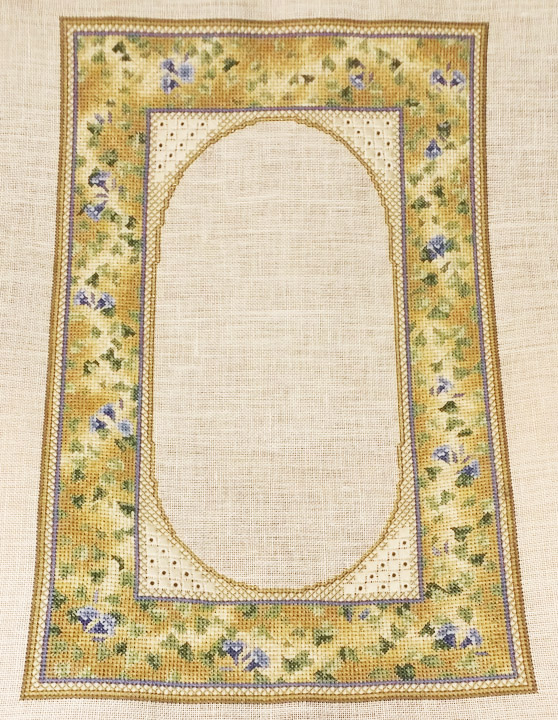 I finished the inner border of TW's Day and figured that would be a good place to take a WIP photo (thought it's not very good since it's still on scroll rods). I haven't yet backstitched it, and I'll take another photo after I do. There's a lot of it, so it will take a while. Backstitching isn't my favorite thing, but it sure does make everything pop.

I made one mistake (as far as I know). Instead of my usual method of making cards for each symbol, punching six holes, and preblending a length, I was impatient and just made one card with a few holes and blended as I went along. For one color, I came up uneven -- I had inadvertently grabbed two lengths of the same color somewhere along the way. The two colors are very close, so I can't tell where the mistake is. I guess that means it's not a big deal, but it irritates me. This is the trouble with being a perfectionist -- being unable to let it go. But I'm trying my best and will attempt to ignore the problem.

I also won't be taking another shortcut. For the rest of the piece, I'll be making up my cards and sticking them in individual baggies like I usually do. Bad stitcher, bad!

Every year, I take inventory of my son's Lego collection. He tends to play with his masterpieces around the house and loses pieces. I try to enforce the rule of one set out, one set in (keyword: TRY), but many times he has things scattered around. So I check that each set has every piece it's supposed to (63 sets and counting). I call this protecting my investment. My husband calls it insanity. This takes me months because it's so boring. However, I'm almost done except for three big sets and have ordered the missing pieces (from sellers on Bricklink, a sort of eBay for Lego).

So this leads me to getting more involved in his sets, which made me look at customized minifigures. Uh-oh, new hobby. I've ordered a few pieces and am going to try creating my own decals. We'll see how it goes. One of my goals for the new year was trying new crafts, so voila. Like many crafts, it can get expensive once you delve into it.
Posted by Arthemise at 7:26 PM 4 comments: 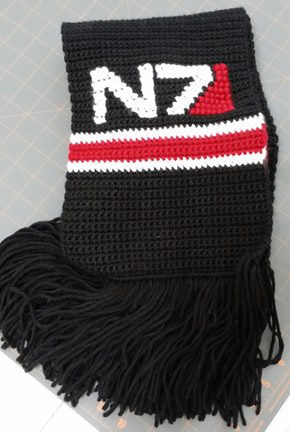 I made this scarf for Matt. It uses the logo for Commander Shepherd from Mass Effect, his favorite computer game ever. I'd meant to give it to him for Christmas, but my illness prevented that. He seemed pretty happy to be able to finally wear it, and we had cold weather to boot (not something that's a given in Texas -- we wore shorts a couple of weeks ago).

I designed it myself. The logo is cross stitched with two strands of yarn. I had tried crocheting it in, but it looked horrible. I know there are some forms of crochet where that's supposed to work, but I couldn't figure it out. Thus, cross stitch, something I know a little about.
Posted by Arthemise at 6:51 PM No comments: 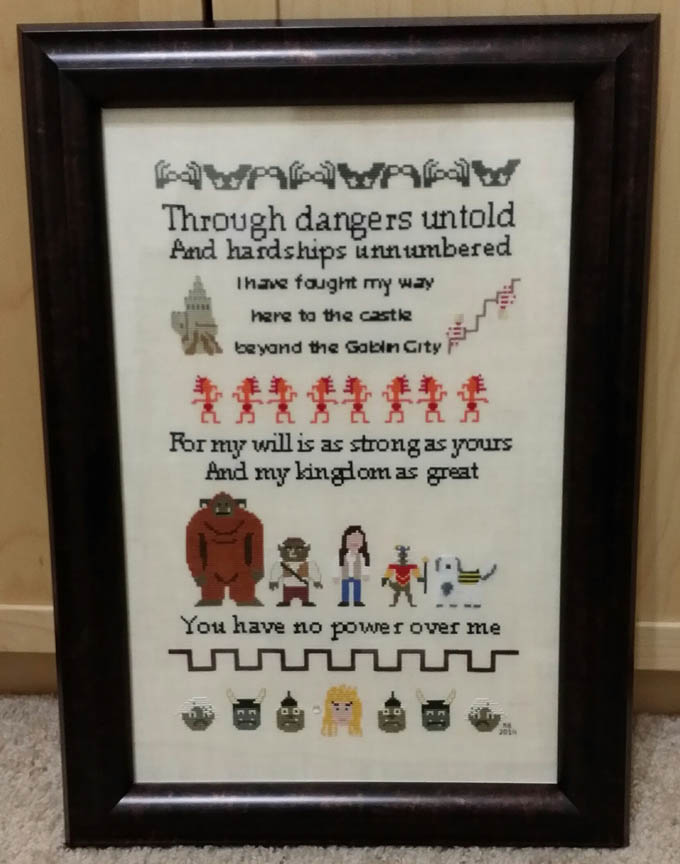 I stitched this piece for a friend so she could give it to her BFF for Christmas. She told me in October, and I delivered mid-December. She said, "No rush." Ha! She had no idea how much time something like this takes, but I was happy to help. I used some fuzzy floss for the dog and added a crystal globe for Jareth. I framed it myself -- not my best but certainly better than the model shown on Etsy.
Posted by Arthemise at 12:28 PM 9 comments: