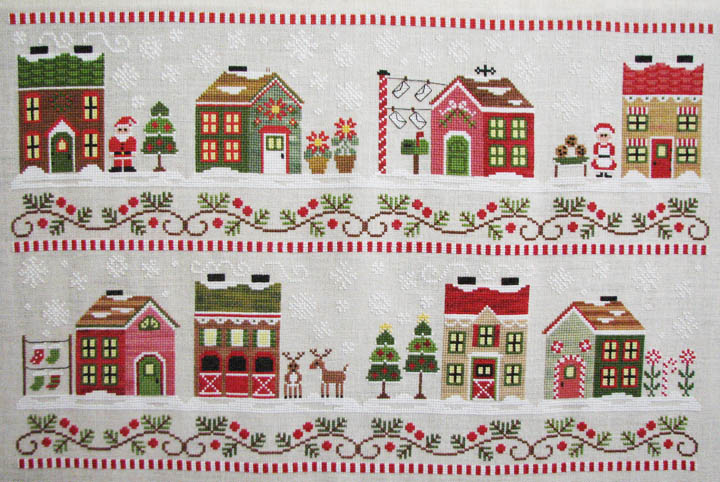 I did restitch those berries since the two skeins of DMC 321 were so extremely different. I'm seriously considering restitching the red in the top border. Maybe once the piece is finished. One row left to go! I'm enjoying this easy stitch.
Posted by Arthemise at 6:01 PM 7 comments: 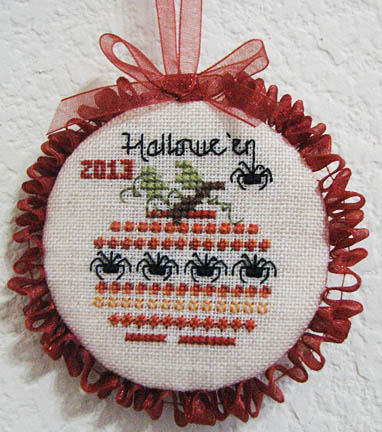 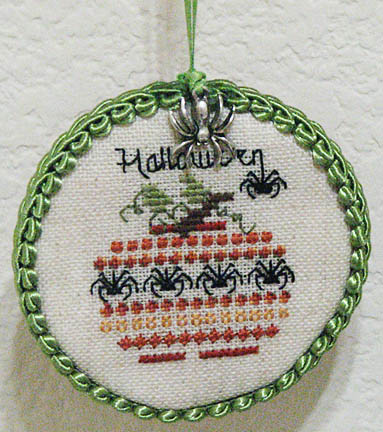 I stitched this piece by Jeannette Douglas -- once for an HOE exchange and once for myself. I tried two finishing techniques. The orange ribbon is mine, and the green cord is the one for the exchange. For mine, I glued the fabric to the matboard and used ruched ribbon. I like the green one better, but I thought I'd have to thrown this one in the garbage at first! Instead of gluing, I stitched it to the matboard using a running stitch. Since the fabric is very stiff, the finished edge was not smooth at all (lesson learned). With the ruched ribbon, it looked terrible. My mom said what a shame it was to throw it away, so I tried again. I found the green cord in my stash, and it hid the uneven edge well. I also like the contrasting color -- even better than the one I did for myself. My ruched ribbon just never turns out that well.

Oh, I just got word that Jill Rensel received my pieces for framing. So exciting! I'm getting four TW faeries, Magnificent Wizard, and a little Halloween piece framed.

Becky let me know she received her piece from me for the HOE Halloween ornament exchange. This one is Pumpkin on Gingham by the Sweetheart Tree. I stitched one for myself too but haven't ornamentified it yet.

Jo had asked how I get such neat cording. I have one of those little handheld corders from Kreinik. My son likes to crank it (it's like a fishing reel), so he helps me create my cording. It's hard sometimes because part of it can be tighter than the rest. When I stitch it down, I have to make sure it's consistent -- fiddly work, as my husband terms it.
Posted by Arthemise at 1:20 PM 2 comments: 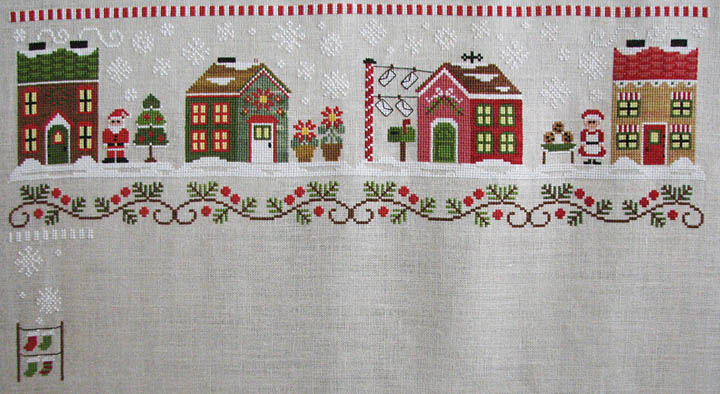 I finished the first of the three rows. So now Mrs. Claus' Cookie Shop has been restitched. At least there was a good bit of time between the two stitchings of it.

One other annoying bit -- I had to switch skeins of floss because I ran out of red 321. And...they don't match. I'm used to DMC being so consistent that it's aggravating when they're not. The only place it's noticeable is in the berries of the separator row. I intend to ignore this as much as possible. At least the two colors aren't right next to each other. If it gets to me, I'll have to restitch the berries.
Posted by Arthemise at 12:52 PM 1 comment: 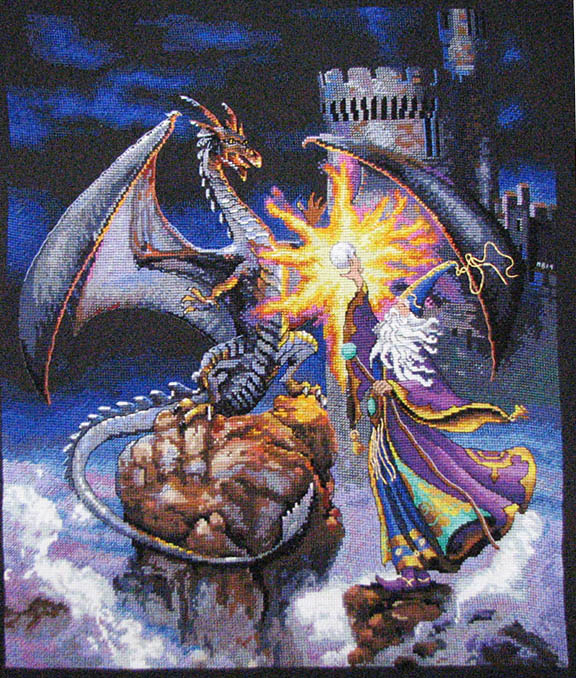 I finally finished this! It's a Dimensions kit and was very annoying.

Matt and I went to a cross stitch show many years ago, and I asked him to pick out something he'd like me to stitch for him (cockily, I might add -- I could stitch anything, or so I thought!). He picked this.

Now, it's not my style at all, but I figured I'd do it for him. At the time I didn't know what a pain Dimensions kits are -- colored charts, half stitches all over, funky backstitching, etc. (I also ran out of some floss.) This is the reason it's been a WIP since at least 2007. I've been putting it on my list of goals for years. And now it's done. I feel such relief.

I had Matt check my backstitching, and he noticed that the black of the towers wasn't stitched. That's the way the pattern is, but he didn't like it, so I filled it in. I agree that it looks better now.

Next up is Santa's Village by Country Cottage Needleworks. This one has been languishing. Here's a tip: don't get all creative and change things around if it's a mystery piece. One part was released per month, and it wasn't until the end that I realized doing it three across instead of four across would mess up the symmetry. So I frogged and managed to snip two fabric threads. I modified the design slightly to cover the threads, so I'm all set to stitch. It's huge.
Posted by Arthemise at 6:21 PM 10 comments: