Legends of the Spellcasters 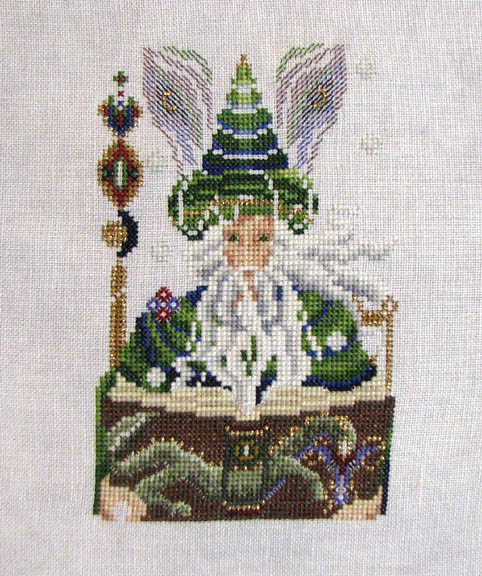 Does he look like Santa Claus? Because that's who Logan thinks he is. So cute.

This is my first progress pic of Legends of the Spellcasters. The design is a collaboration piece. This panel is by Black Swan. I still have the backstitching to do, plus beads, which will be after all the stitching is done. I'm working on this as part of a SAL on the TWBB in case anyone's interested.

When all I had seen of the piece was a small photo online, I wondered if those were wings above his head. Now I know they're supposed to be the eyes of a dragon. 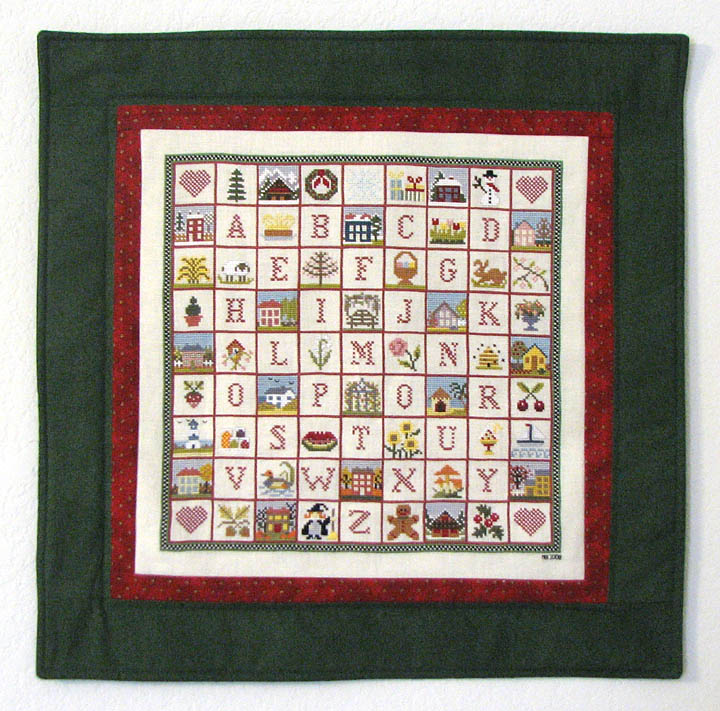 Yes, it's another wall hanging! This is Damier, which I finished the stitching on a while back. There's a sleeve on the back with a cafe rod, in case you're wondering. The finishing has a few flaws, but I proclaim it good enough. I think I'm getting the knack of this. My mom says I need a quilting foot for my sewing machine to do some of the stitches properly, so I may eventually look into that.
I have a few other things left to finish, but I think they're going to be flat folds or cushioned matboard hangings. This latest round of sewing has also given me the urge to work on a quilt, which I've never done. I've done some applique work, which I really like. But what to stitch...during my recent convalescence, I thought of doing a quilt for Logan with all the things he likes. Cars would figure in this prominently, of course.
Pics of Legends of the Spellcasters soon.
Sinus surgery: I survived my sinus surgery, though it was very unpleasant. With emphasis on the very. I managed not to panic myself, which I'm pretty proud of. These kinds of things can get to me if I let them (kind of like when I freaked over the thought of a C-section). Recovery included lying in bed propped up on many pillows, taking much hydrocodone, and suffering through some headaches, burning nose, and regular bleeding. I never want to go through that again. I'm guessing mine was worse than normal because they found out my deviated septum was about as bad as they get. I also had an active infection, which the doctor thinks I've had for many months. Several rounds of antibiotics never got rid of it completely. Now I just have a stuffy nose, headaches I can deal with with Tylenol, and regular spitting of nastiness. Oh, and weekly doctor visits so he can vaccum out my sinuses. Eaughhh!
In a couple of months, I hope (?) to have bariatric surgery, the LapBand since that's all my insurance will pay for. I was hoping to go with the gastric sleeve (basically they turn your stomach into a tiny tube), but it's not FDA approved and therefore not covered by my insurance. After this last surgery, which was worse than the doctor said it would be, I'm not terribly eager for another round of cutting, but it's something I have to do. The sooner it's done, the sooner I can recover and function like a normal human being!
Posted by Arthemise at 11:55 AM 6 comments: