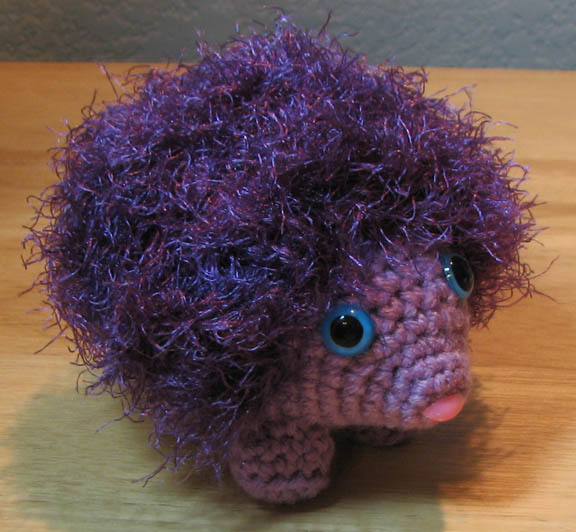 I finally ordered the nose to finish up this little guy. Staring at me with the bug eyes. (We just watched Ghostbusters again -- amazing how many of our family sayings come from that movie.)
I hope you had a great Thanksgiving! I played Glitch, started playing Star Wars: The Old Republic, and am cutting out fabric for my first quilt. Oh, and I finished up the Harry Dresden books. Quite a break. 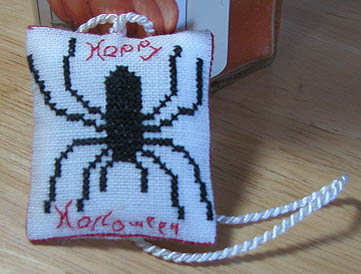 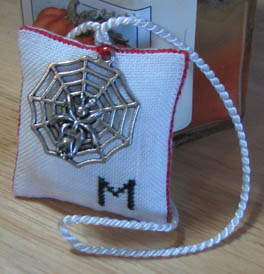 I received this beautiful Halloween fob from Ina for our exchange on Hooked on Exchanging. I like the big spider charm on the back too. I'm not sure why I like cute Halloween items so much, but it was a thrill to receive this!
I'm working on a Christmas box exchange right now. It's giving me a few minor fits, but I'm sure I can work through it.
Posted by Arthemise at 9:19 AM 3 comments:

My first scarf in a long time 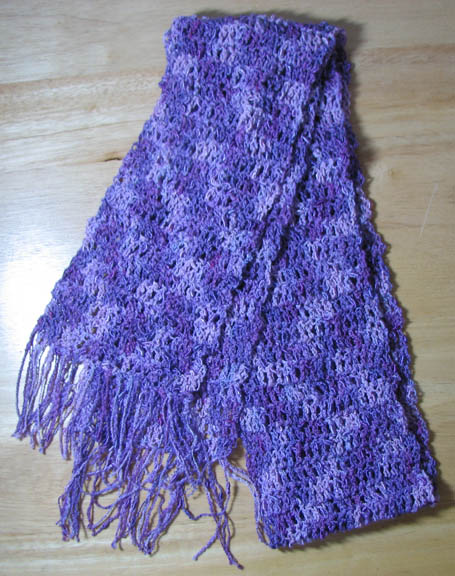 When I was a teenager, I crocheted my dad a black scarf. He was a policeman, and it was about the only color he could wear without looking odd. :-) Being in the South, we don't really need to wear scarves (unless you're a policeman who has to go out in every kind of weather), so I've never worn one. I think I'll wear this one. I love purple, and the yarn feels great, soft and nubby.
The yarn is one of the items I bought at the Houston Quilt Show. Jo at Dinky Dyes had one skein of purple yarn, so I had to make the scarf skinny to get it long enough.
Speaking of the show, here's what I bought:
I went with my mom and friend Amanda and had a great time. I'm inspired to quilt now, so my mom and I are going to work on a quilt for Logan. It has cars, buses, and trucks on it.
This past weekend was Camp Stichalot, put on by Ginger's. I was shy at first but opened up as the weekend progressed. I had a great time--more so for the people than the stitching because I didn't bring anything I was anxious to stitch. Silly me. The Austin Comic Con was also this past weekend, which is why I only got to spend Thursday through Saturday noon at the retreat. I'm hoping to go to the retreat in March too. The Compass Centre is really nice. Great food and nice facilities.
Posted by Arthemise at 1:31 PM 1 comment: